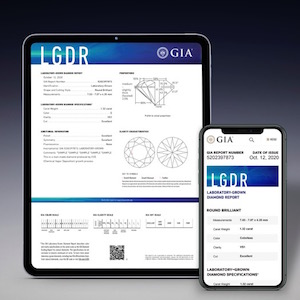 In a shift from its initial stance, the GIA is now including information about a diamond’s production method in its new lab-grown diamond reports, which it calls LGDRs.

The new reports will specify whether the stone was created by either the chemical vapor deposition (CVD) or the high pressure, high temperature (HPHT) method and whether there are indications of post-growth treatments to change the color.

So, for instance, one sample seen by JCK says: “This is a man-made diamond produced by CVD (Chemical Vapor Deposition) growth process and may include post-growth treatments to change its color.”

All laboratory-grown diamonds submitted to GIA will be laser-inscribed with the GIA report number and the words “Laboratory-Grown” to ensure that consumers can clearly differentiate them from natural diamonds.

Since 2006, when it first began grading lab-growns, GIA has graded those diamonds on a wider scale than it has natural diamonds, arguing that its standard scale reflects a stone’s natural rarity. But this summer, it decided that it would grade lab-grown diamonds using the same scale it formerly reserved for natural diamonds, citing the growing popularity of lab-grown gems in the market.

The new reports have a different look and feel than the standard GIA reports, to distinguish them from those of natural gems.

The cost is the same as for natural diamonds, with the addition of inscription services fees when applicable.

For the time being, the reports will be issued in digital versions only. Each report features a QR code linked to a custom landing page on GIA’s website, which offers comprehensive information on laboratory-grown diamonds.

(Image courtesy of the GIA)