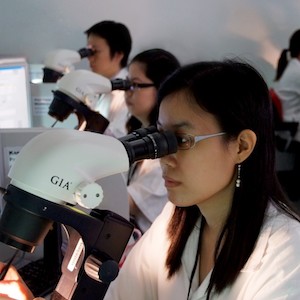 The Gemological Institute of America’s (GIA) grading lab will now print its standard color and clarity grades on its lab-grown diamond reports—a change from how it’s noted lab-grown diamond grades for the last 14 years.

GIA chief executive officer and president Susan Jacques announced the move at the end of a JCK Talks webinar at JCK Virtual 2020 on Tuesday.

“We are responding to consumer demand,” Jacques tells JCK. “We want to make sure that consumers are educated, that we can protect their trust in the gem and jewelry industry as well as the products they are buying. As consumers adopt this new category, it’s important that we evolve with the new consumer.

The new reports will debut in the fourth quarter and will be available in digital form only. It will also offer Diamond Dossier reports for smaller lab-grown diamonds (0.15–1.99 cts.). Prices will be the same as its reports for natural diamonds.

The reports will not include any info on the diamond’s growth process or if they’re being sold “as grown,” though Jacques says that information may be added down the line.

“We won’t offer it at this point, but that’s not to say that won’t happen in the future if that’s important to the consumer. Consumers are not coming in, saying, ‘I’d like a CVD.’ That is a trade differentiation. It is not happening on a consumer level.”

Unlike the American Gem Society’s lab—which recently resumed grading lab-grown diamonds—GIA isn’t presenting the grades any differently (AGS prefaces each of its grades with LG, for lab-grown) or including any notes about rarity. It does plan to make the reports look different so there is no mistaking them.

“They will have a different updated design and format,” says Jacques. “In the past some people felt the reports were too similar in style, so they will have a uniquely different approach than the natural diamond grading report.”

All the diamonds will be inscribed as “lab-grown.”

While it’s changed its policy for lab-grown diamonds, the GIA will not issue separate reports for lab-grown colored stones, though will continue to issue identification reports, says executive vice president and chief laboratory and research officer Tom Moses.

The GIA lab has offered grading reports for lab-grown diamonds since 2006. There has been little demand for them, in part because they formerly used terminology the lab-grown market dislikes, such as synthetic, and also because they have reported grading ranges (like VS and colorless) instead of specific grades (like VS1 or F color).

Last April, GIA changed the terminology on the reports but kept the grade ranges. Lab-grown sellers stayed away, regardless.

“[The reports] have not been very attractive to the industry,” says Moses. “The number of submissions have not changed.”

He says that offering the new reports will give GIA a better understanding of what’s out there. “The more of this product that we see, the more we know and understand.”

Jacques says that the change was not spurred by commercial considerations, such as the current slowdown in the natural diamond market. “Our decisions are always based on our mission as a nonprofit tax-exempt entity and never driven by profits and revenue.

“We believe there is room in the market for both natural and lab-grown,” she adds. “There is ample market share for both products to coexist.”