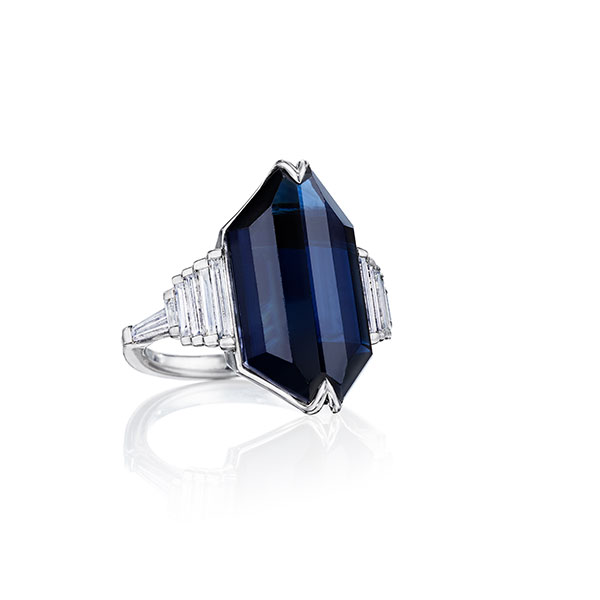 It’s exciting for any jewelry designer to see their pieces worn on the red carpet, and there’s also the unique thrill that comes with having your jewelry worn by a character in a movie. In this regard, New York–based designer Doryn Wallach had a lot to celebrate when Amazon Studios’ Late Night premiered in theaters earlier this month.

Its main character, played by Emma Thompson, wears a very striking sapphire engagement ring (pictured at top), a one-of-a-kind Wallach design that caught the eye of costume designer Mitchell Travers, in nearly every scene. (In her coverage of the jewelry in the film, The Adventurine’s Marion Fasel, called it “possibly the most unique engagement ring ever worn on-screen.”)

Meanwhile, someone else was also taking immense pleasure in the engagement ring’s star turn—the supplier of the vintage sapphire and baguettes used in the ring: Estelle Newman, aka @harryandaughterjewels, a private jeweler based in New Rochelle, N.Y.

Newman, the daughter of Holocaust survivors who emigrated from Poland, inherited her late father Harry’s jewelry business, which came with a vault full of finished jewelry and heaps of loose stones of an extraordinary and unique quality. “In my parents’ later years I would sit with my dad and have him help me understand what we had,” she says. “I was living in south Florida and owned an executive search firm. Taking over their jewelry business was never a thought, but soon I realized that the responsibility of what to do with the inventory was mine.”

But Newman soon found that “selling loose stones per carat did not give me joy.” So she began to make and sell custom pieces using turquoise from Persia, Italian coral, Victorian carbuncle garnets and old mine– and rose-cut diamonds.

Newman then began to think about collaborating with new, younger designers who perhaps did not have the funds to build their collections.

And now that’s Newman’s focus. Since officially launching Harry & Daughter Jewels last year, “I hand-pick designers to create with and only supply gems if they’re planning to mount them in a design. I don’t sell my stones for inventory,” she says. “I like to say that my gems were buried decades ago and have been given new life without disturbing the environment.”

The Doryn Wallach collaboration was the result of Newman’s first sale and since then, through Instagram networking; connections with the MJSA; and with Jeannette Caines, vice president of the Jewelry Arts Institute, she’s gone on to collaborate with designers such as Angely Martinez, Jules Kim of Bijules, the Moonstoned, Jewels by Grace, and Dana Kiyomura.

“The generation of jewelers like my dad is nearing an end, as CAD and robots take over,” says Newman. “I am left to give my dad’s legacy one last breath and share his gemstones and designs with whoever believes in a good story…and a good value.”

Top: The platinum ring set with a 9.89 ct. sapphire and baguettes worn by Emma Thompson in Late Night is available for sale through its designer Doryn Wallach. She sourced the gems through private jeweler Estelle Newman of Harry & Daughter Jewels. The two discovered the sapphire by accident, as it was stashed in a box full of some loose onyx Wallach was considering for her Art Deco–inspired designs.