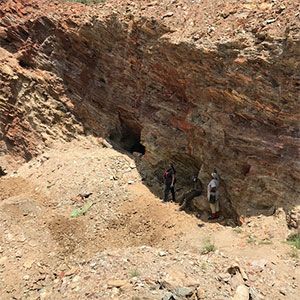 Gem Legacy, the gem world nonprofit recently launched by gem cutter Roger Dery and his family to support local mining communities in East Africa, has its eye on a pair of prizes that are guaranteed to better the work flow at the year-old Precious Women mine in Mkuki, Kenya.

The nonprofit is working to raise $9,500 to buy and install a used compressor, which will make the use of power tools possible (the female workers currently mine with farming tools), and a used jackhammer.

The Precious Women mine has been open for approximately a year and is finding small, richly colored tsavorite garnets.

It’s run by a group of Kenyan women who’ve come together to make positive change in their lives and community. Most are widows, “and all have challenges to keep food on the table,” according to the press release. “Their goal is to share the wealth of the mine with those in greatest need in the local community.”

Esther Yaro, head of the Precious Women mine, is the widow of Gichuchu Okeno, “a dear friend of Roger and Gem Legacy who passed away in 2016,” according to the same statement.

Precious Women is Gem Legacy’s first long-term partnership with a mine. The nonprofit chose it “because of its female leadership and unique impact in the local community,” said Roger Dery in the same statement. The fund-raising effort for the tools is a continuation of a collection begun by Continental Jewelers, which partners with Gem Legacy and has already raised $2,550 toward the machinery buy.

For more information about Gem Legacy—and to donate to the effort to procure the machinery for the Precious Women mine workers—email info@gemlegacy.org or visit gemlegacy.org.

Top: The Precious Women mine (all photos courtesy of Gem Legacy)