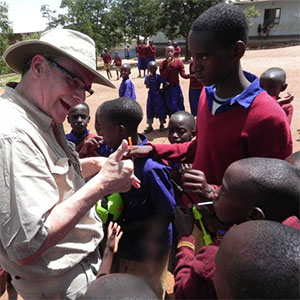 Gem Legacy supports several initiatives, including those that increase educational opportunities in gemstone faceting, a trade that hasn’t flourished on the continent, but makes sense for it: “The employment is sorely needed and has the ability to transform families and communities,” said Dery in a prepared statement. The nonprofit supports the Arusha Gemmological & Jewelry Vocational Training Centre in Tanzania and is working in Kenya and Malawi to create schools to train locals how to facet.

The nonprofit also supports 70 children cared for by Luzi Children’s Orphanage in Malawi. Currently, the orphanage is trying to fund itself through selling gemstones, but the income isn’t enough to cover the needs of all the children.

Gem Legacy collects donations for the kids’ basic needs, school supplies, and eventually their training in gemstone faceting or mining. The nonprofit donates drilling machines, wire, and starter supply packs to children who age out of the orphanage.

Since 2011, Dery has been funding education and basic needs for the kids of local Maasai miners in the Longido region of Tanzania—at the Kitarini Primary School. The number of Maasai families living in the Longido region has skyrocketed in the past two years, since multiple ruby deposits were found, making funding (which for the Derys is now under the wing of Gem Legacy) more crucial than ever.

The traditionally nomadic Maasai tribe members’ semipermanent residence in the Longido area has given their children the opportunity to attend school, which they typically don’t.

“Gem Legacy is dedicated to what we’ve been doing in Africa for over 20 years,” said Dery in the same statement. “In our 57 combined trips to Africa, we have met thousands of people in East Africa’s remote villages and bush mines where gems have had a remarkable influence on their lives. Gems bring hope, make a difference, and leave a lasting change—a timeless legacy. It’s time to raise up an army to support the husbands, wives, daughters, sons, brothers, sisters, granddaughters, and grandsons of gemstones.”

One hundred percent of the tax-free donations Gem Legacy collects go to support its partner programs. If you’re interested in donating, email info@gemlegacy.org or visit gemlegacy.org.

Top: Roger Dery, president of Roger Dery Gem Design, during a visit to the Kitarini Primary school in Tanzania (all photos courtesy of Gem Legacy)