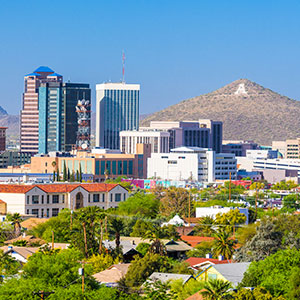 Trade events are continuing to feel the impact of COVID-19.

The latest victim: some of the gem shows that traditionally take place in Tucson, Ariz., in February.

JCK Tucson, originally scheduled for February 3–6, will not be held in 2021.

“We fully support the Tucson Gem Week community and a return to in-person buying that it facilitates,” said Sarin Bachmann, group vice president for JCK and Luxury for Reed Exhibitions. “JCK Tucson was a beloved edition in JCK’s show lineup, because it provided a spirited and intimate environment that celebrated artisanal and unique vendors within the jewelry industry. JCK will continue to showcase the passion and creativity of our industry’s most exceptional designers, craftspeople, and brands with its JCK and Luxury shows in Las Vegas in June, and online at JCKonline.com.”

The Gem & Jewelry Exchange (GJX), another gem show that usually takes place around the same time, has also canceled its 2021 edition.

“With the stringent occupancy limits required, and considering the safety and well-being of our buyers, exhibitors, and staff, we do not feel we can safely hold the show,” said a statement on the GJX Facebook page. The organization added that the move was “extremely disappointing.”

GJX says its next show will be in February 2022, “which cannot come soon enough.”

At press time, the American Gem Trade Association’s GemFair is reportedly still taking place. The association did not answer a request for comment by the time of publication.

The Accredited Gemologist Association (AGA), which typically holds a conference in February, has announced that its 2021 conference will take place virtually.

As a result, the AGA will not give out its Antonio C. Bonanno Award for Excellence in Gemology in 2021. Instead, the next award will be bestowed in 2022, and it will be determined by votes from the canceled 2021 award.

Also due to COVID-19, Watches of Wonders—the former SIHH—has decided not to hold a physical event next year. The exhibition was originally scheduled for April 7–13, 2021, in Geneva. Instead, it will be held virtually on the same dates, on an upgraded platform at watchesandwonders.com.

The digital edition will spotlight 50 brands.

The fair hopes to hold what will be its first physical edition in 2022. It was supposed to debut this past April but was canceled.

COVID-19 has also forced a change of plans for the jewelry events that typically take place in January. The 24 Karat Club of the City of New York has canceled its annual banquet; Jewelers of America’s Gem Awards have been moved to July; and the annual luncheons from the Jewelers’ Security Alliance and Jewelers Vigilance Committee will be held virtually.