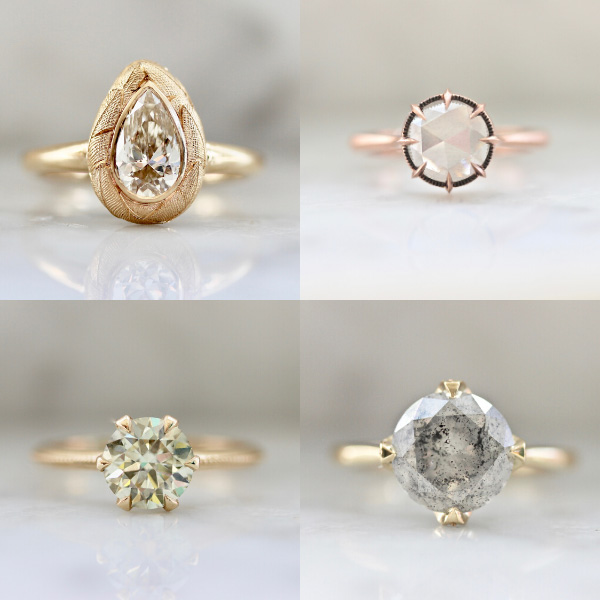 Exactly a year ago, Catherine Cason, owner of online retailer Gem Breakfast unveiled something called the “Sexy Hexy” project, which involved collaborating with a diamond supplier and challenging seven indie designers to each create a ring with a hexagonal diamond. Part pop-up sale, part social media campaign, the event was entirely successful.

Ninety percent of the rings sold out in 48 hours.

Given how Sexy Hexy turned out, Gem Breakfast was naturally ready to come back for seconds, and today’s the day: Starting at 1 p.m. EDT, it’s serving up solitaires.

“We challenged eight designers to each create a totally unique solitaire diamond ring, which really put them to the test,” says Cason. “It’s hard to make something really cool and amazing around just one stone, but we choose the right designers to do it.”

Cason partnered with diamond supplier Misfit Diamonds, which provided the designers with an array of cut material at accessible price points.

The idea to focus on solitaire diamond rings had been percolating for about six months or so, says Cason. “We have been holding onto this idea to capitalize on spring engagements. We’ve found that a lot of people get engaged in the spring. Choosing solitaires was strategic because they are always best sellers for us and this was a fun play on that idea and also meant to very salable.”

And while this spring in particular is awash in uncertainty for the reason that does not need to be named, Cason and her team have been promoting the pop-up on Instagram using #solitairesquad since January and continue to share frequent updates with their fans and followers, bringing them along in the process to build anticipation.

“People have been looking forward to this for months,” she says. And being housebound, glued to your device of choice might not be a bad thing. ”I think people are on their phones right now more than ever. I have been shifting to selling on Instagram, and it’s working.”

Gem Breakfast’s target customer does not care for vanilla, so the Solitaire Squad is composed of spicier ring styles that use salt-and-pepper diamonds, silvery-gray stones, and lots of marquises. And the the creators are all under-the-radar independent studio designers in the United States and Canada.

All of the solitaire rings in the pop-up are highlighted above and below.  Some lead with simplicity, others warranted multiple views to display the ingenuity and highly detailed craftsmanship that went into making each ring a unique creation from all angles—top to undercarriage, basket to band.