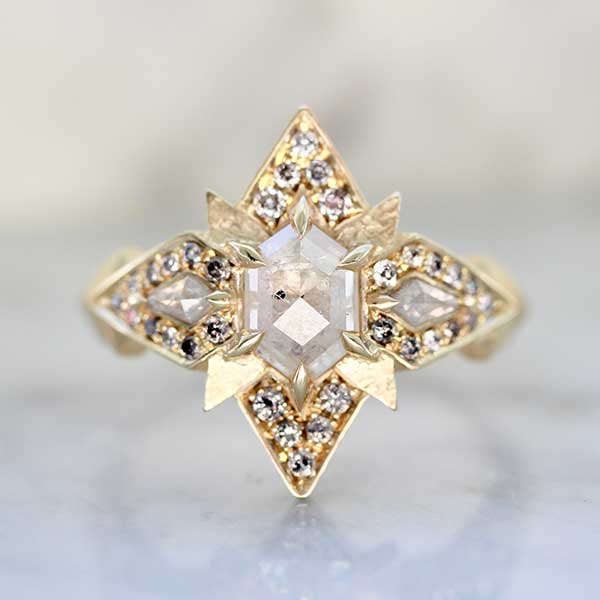 Jewelry retailers hoping to capitalize on the well-documented popularity of hexagonal diamonds may want to pay attention to something happening today over at Gem Breakfast. Called the #sexyhexyproject, it’s an online pop-up and social media campaign that corrals seven one-of-a-kind rings, all featuring hexagonal center diamonds in designs by independent, under-the-radar artisans.

Having covered the San Francisco–based brand here on All That Glitters earlier this year, I remain impressed with founder Catherine Cason’s ability to disrupt all that the jewelry industry holds dear as she and her team continue to move product consistently on Instagram with alarming speed. And her latest initiative holds similar promise. “We have no doubt that these rings won’t last long,” she says. “Many would be valued at double our prices, so I think they will go in a heartbeat. Some lucky people are going to get some amazing deals.” The expected sales volume is $28,000.

The idea to stage a hexagonal diamond pop-up of commissioned ring designs stemmed directly from Gem Breakfast’s audience, who indicated demand and enthusiasm for this specific diamond cut via an Instagram poll. Cason worked with Ashkan Asgari of Vancouver, B.C.–based diamond wholesaler Dream Diam Ltd. to supply her hand-picked stable of participating designers with a selection of diamonds at very accessible prices. “This allowed the designers to create rings at a really great value for our customers,” she says.

Cason and Asgari are frequent collaborators and have partnered on pop-ups in the past. “The last time we did something like this, I sold eight rings in six weeks, each with an average price point of $3,000. We basically view these projects as a marketing expense, which allows us to offer great prices to our fans.”

The #sexyhexyproject was announced to Gem Breakfast followers—mostly jewelry-obsessive self-purchasers—in late January starting with the tease below, and Cason and her team have been sharing frequent updates, bringing them along in the process.

As such, anticipation for the launch, says Cason, is high. Both she and Asgari, plus all of the participating designers, will be posting about the pop-up using the hashtag #sexyhexyproject as soon as it goes live (9 a.m. PDT for those who plan to get first pick). “Everyone is cross-promoting on their channels, which I like to think creates a mushroom effect,” she says. “You can’t ignore it if nine people are all posting about something at the same time.”

And for a certain kind of jewelry customer, one who favors the unique appeal of salt-and-pepper diamonds and modern geometric configurations, these rings rather cleverly tick all the boxes, with or without a robust campaign to leverage their charms.

“The designers got to let their creativity loose without specific end client requirements,” says Cason. “You can see how this freedom translated into the exceptional rings we produced.”

And here they are.