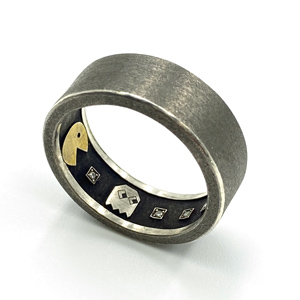 When jewelry retailer and designer Jamie Hollier, owner of Balefire Goods in Arvada, Colo., got married, she and her husband folded quotes from sci-fi chestnuts Battlestar Galactica and the His Dark Materials series into their vows.

A self-described geek, Hollier has always been into genre fiction, film, and TV. She played Dungeons & Dragons in college, and a friend she played with once made her a pair of earrings by drilling holes in D&D dice—which she wore proudly. The dice-earring maker called the style “Geeklery,” a description Hollier loved so much, she claimed the website domain of the same name soon after. (She also owns the similarly spirited nerdlery.com.)

Roughly two decades later, Hollier has officially introduced Geeklery as a retail platform for jewelry, objects, and art that celebrates cult-favorite fandoms, from Pac-Man and Star Wars to Alice in Wonderland and Harry Potter.

The site, which debuted Oct. 1, is an expertly curated showcase for traditionally crafted jewels, arts, and objects that just so happen to use motifs and characters from beloved literary, TV, and film franchises. There’s nothing “toy” or “kiddie” about the site’s meticulously handcrafted pieces. Geeklery only spotlights artisans Hollier’s physically seen work from (though she does have plans to expand the site’s stable of makers in the coming months through careful vetting).

She describes the e-comm’s business model as “a drop-ship site,” meaning that she doesn’t hold the inventory for Geeklery—the site functions as a facilitator between consumer and maker, so artisans drop-ship or create styles to order.

Hollier opened Balefire Goods in 2017, and says that as she’s become acquainted with fellow metalsmithing pros, “I realized there are a bunch of nerds in the industry!” At the same time, she adds, “It’s hard to find nice, artisan-made jewelry that’s inspired by fandoms. We started to get requests for them. And I thought, ‘I think we should try it and do it.’ ”

The COVID-19 pandemic gave her another push: She was forced to close the store for a time and then adhere to strict capacity limits. As COVID cases have spiked in recent weeks, “Denver announced another phase of lockdown recently,” she notes. “We can now only have 25% capacity in the store. So I started thinking, ‘How do we make something that even if we close will work?’ ”

One of Balefire’s most popular styles this past year has been a ring, by local brand Tuggle Designs, whose interior depicts Pac-Man eating diamond dots—yet another indication that a fandom jewelry site could work. “We’ve had a ton of people who love that ring and buy it just for the Pac-Man [detail] inside it,” Hollier says.

Hollier’s also guessing that in this tumultuous time, jewelry fans could use a little playfulness in their products. “I think people want their jewelry to be reflective of their interests and passions,” she says. “Not everyone needs a halo engagement ring and a certain diamond. They want something that’s more about connecting to the stories they care about, and less about connecting to the stories that come out of the fine jewelry industry.”