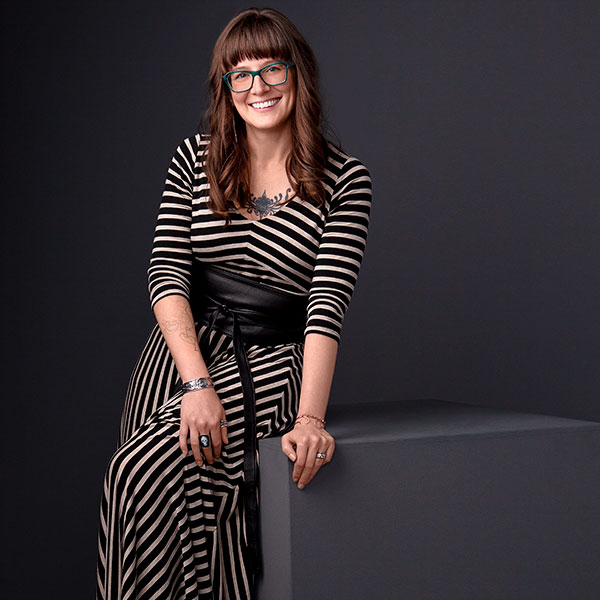 Located just outside of Denver, in the poetically named city of Olde Town ­Arvada, Balefire Goods is a jewelry store with a mission: to connect jewelry lovers with artisan jewelers who specialize in what owner Jamie Hollier calls “slow fashion,” aka ­handmade, heirloom-quality pieces.

Hollier, a 39-year-old jewelry designer and serial entrepreneur who also co-owns two technology companies she cofounded in the past decade, opened the boutique in late 2017 after consciously pivoting away from the digital startup life and toward designing and making her own jewelry—skills she cultivated in her teens and 20s.

Many of the bespoke brands at Balefire are fabricated with ethically sourced materials, which dovetails with the shop’s premise of spreading good by selling quality goods. Says Hollier: “The idea of working in a space where I feel we are leaving a positive impact is very much a part of who I am.”

How do you think Balefire Goods stands out from its competitors?

You can buy jewelry that starts at $30 but then goes all the way up to $1,000, and it has a different feel from a traditional jewelry store. One of the best compliments I’ve gotten is that the store feels like a permanent artisan fair. I love that. I wanted to sell fine jewelry—stuff that will last, stuff that will become heirlooms. And I wanted people to know they could buy from a person who made a thing—and that they could buy it at a similar price that they’d spend on a mass-produced brand. There are people who want to buy things online. That’s their thing and that’s fine. We sell a little online, but I don’t see us being a big online retailer. We appeal to those people who want to connect with artists.

Whom would you consider to be your core client?

I always joke about this, but it’s fun, middle-aged women with funky hair! Women who have an artistic streak, but they’re lawyers, doctors, teachers, a whole range of things. They all have an interest in being a little independent and different.

How did you get into jewelry initially?

My undergraduate degree is in metalsmithing and art history. And I worked for a jewelry store for a while before working as an art buyer for a publishing company in the late ’90s, early 2000s. Then I followed opportunities, and I ended up opening two technology companies. I still have them—and it was great working on them, but it wasn’t what I wanted to be doing. When I traveled, I would visit jewelry stores. I always kept a little bit of an eye on the artisan jewelry world. Last year I said, “I’m ready for a change,” and I told my husband I wanted to do an art jewelry store—there wasn’t really one like that in the Denver area.

You recently debuted a collection of wedding and commitment jewelry sold at Balefire—tell me about that.
The collection is called Kindle, and it’s ethically sourced and is based on really simple designs with simple lines. I launched it with a local metalsmith I know, Jamie Mclandsborough. We wanted something that didn’t follow trends, that had classic lines, and that was made to last—it had to live up to the active Colorado lifestyle. I was introduced to Jamie through the local metalsmithing community. We hit it off and felt similarly about things. I said, “I want to make a different kind of [wedding and commitment] line.” And he told me he wanted to make a collection that fixes all the things he has to repair on rings all the time. Both of us were like, “We want them to buy a ring and never come back to us with it!”