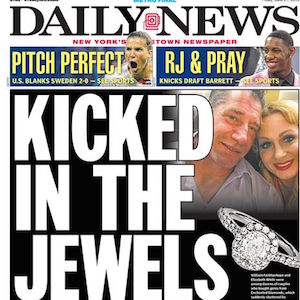 On June 20, Enchanted Diamonds, a New York City–based online retailer that has had a showroom in Times Square, filed for Chapter 7 in New York federal court.

Bankruptcy papers for the e-tailer, whose business name is Online Diamonds International Corp., list assets as $203,000 and liabilities as $1.7 million. The site says it is no longer accepting orders, and its phone number is currently out of service.

The LinkedIn page of company president and cofounder Joshua Niamehr says the e-tailer, which aims to “disrupt… the way engagement rings are bought,” was founded in 2012.

Its travails were the subject of a front-page story in today’s New York Daily News, in which several customers told the newspaper they were left stranded without their rings.

Niamehr reportedly told the News that his company’s debt load prevented it from fulfilling customer orders.

“A business relationship with [aggregator] Rare Carat went bad,” he was quoted as saying. “There is no scam here, no fraud.”

Niamehr could not be reached for comment by JCK.

Rare Carat chief executive officer Ajay Anand, whose website listed Enchanted as a retailer, says it’s helping Enchanted consumers get their money back—even if they didn’t reach the retailer though his site.

The site has enlisted local lawyer Peter Cane—who represented a YouTuber in a case brought by Brilliant Earth—to represent any customers who say they didn’t get what they ordered. Rare Carat is paying Cane’s legal fees.

“My instructions are, anyone who has proof, Rare Carat has authorized me to represent them and they will pay the bill,” says Cane.

So far, between 30 and 40 customers have reached out to him, he says. He has already filed suit in New York Supreme Court on behalf of a Dallas man who claims he didn’t receive a $35,000 custom ring he ordered from Enchanted.

Anand says he hopes law enforcement gets involved, and he has brought a complaint to federal prosecutors.

“We have listed this website for two and a half years and never had a problem with them,” he says. “This is a big problem for the industry: How do you know in cases like this?”

He adds that site visitors have, until now, generally been happy with Enchanted, and, until recently, it boasted an A+ rating from the Better Business Bureau. In light of new complaints, the bureau has suspended the company’s accreditation.