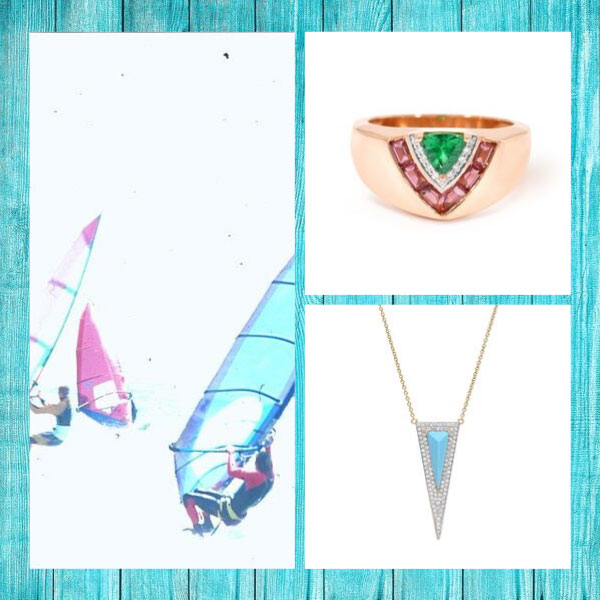 One of the new faces given the opportunity to showcase her line at NYC’s Bergdorf Goodman this month is Los Angeles–based designer Emily P. Wheeler.

Since introducing her line in 2017, her work has attracted the attention of a number of fashion magazines (she also appears in the July/August issue of JCK), and celebrities like Angela Bassett and Rachel Brosnahan. And Taylor Swift, as recently as last month (the singer wore a Wheeler cocktail ring with her rainbow-hued Versace shorts suit at the Teen Choice Awards).

Wheeler’s aesthetic—sharp angles, crisp geometric shapes, and a vibrant palette—is very influenced by her father, an architectural photographer (and avid windsurfer). Joining him on road trips in the Southwest when she was young, Wheeler would collect beads and semiprecious stones, later crafting jewelry for herself and friends.

She started her career in the tech world in Silicon Valley, and rediscovered jewelry-making in her 20s. What began as a hobby quickly became a business, and over the last two years, she has worked to arrive at a signature style that’s infused with California sunshine and a certain coastal chic that many will find appealing.

In fact, her fall collection is inspired by 1980s surf culture, neon colors (very on trend!), and the work of artist Luis Barragan.

Here’s a look at her newest pieces.

Top: Emily P. Wheeler’s collection is inspired by 1980s surf culture, including windsurfing, a sport at which her father (shown) excelled. Her collection will be at Bergdorf’s through the end of September. Photo courtesy of Emily P. Wheeler. Tiered Signet Ring with green tourmaline, pavé diamonds, and pink sapphire baguettes in 18k rose gold, $2,900; Triangle necklace with turquoise and diamonds in 18k white and yellow gold, $5,400