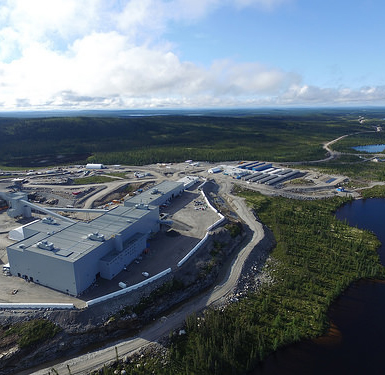 Dominion Diamond Corp. is in talks to possibly merge with fellow Canadian miner Stornoway Diamond Corp., according to a report in Reuters.

Both companies did not respond to requests for comment.

Stornoway is based in Quebec, where it operates a diamond mine (pictured). Dominion, considered the third largest diamond miner in the world, owns the Ekati mine in the Northwest Territories and markets 40 percent of the production from the Diavik mine.

According to the Reuters report, if the companies do merge, Stornoway CEO Matt Manson could head the combined entity. Dominion’s current CEO, Brendan Bell, is due to exit the company this summer, and Dominion is searching for his successor.

Meanwhile, Dominion’s board still harbors doubts about one offer now on the table—a $1.1 billion takeover from Washington Companies.

In correspondence released by Dominion, chairman James K. Gowans says talks between the two parties cannot proceed due to Washington’s request for what he terms a “lengthy” period of exclusivity, insistence on approval of a new CEO, and refusal to accept a “customary” standstill.

In his response, Washington president Lawrence R. Siskins accused Dominion’s board of “mischaracteriz[ing]” his company’s requests, adding that Dominion’s shareholders should be “very disappointed” by its actions.

He denied the requested exclusivity period was abnormal or in any way lengthy, and called the board’s standstill request too “broad.”

As far as the CEO, he said, “We specifically provided that the board of directors could continue it[s] search for a new CEO. What we requested was that you not hire the new CEO during the period of the exclusivity where we were jointly working together towards a transaction. As we repeatedly explained, no public company CEO candidate would want to be hired to learn that the board of directors was considering [a] possible sale.”