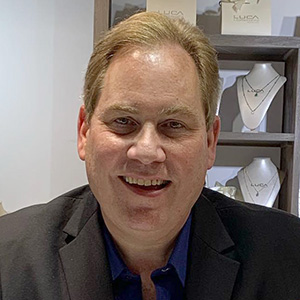 William “Lecil” Henderson, a much-respected and -liked jewelry designer known for his line the Henderson Collection, died on Nov. 22 of a heart attack. He was 62.

In 2012, Henderson told InStore’s Beth Bernstein that he “got into the business the old-fashioned way: I grew up in it.

“My father was a national sales manager for a jewelry manufacturer,” he said. “After a few months on the road with him, I found I loved the idea of mixing sales, marketing, and human relations. My mother was also a big influence. She’d say, ‘Son, no one needs jewelry. However, it makes us very happy when we get it.’ Her ideas remain the core ideals of our business.”

He called Frank Lloyd Wright one of his greatest inspirations.

“I could relate to his classic lines and how form and functionality worked in harmony,” he said. “During an early family trip to the Arizona Biltmore, I marveled at the scale of his work. The lines were clean and simple yet still extremely elegant.”

Henderson graduated from Wake Forest University in 1981. He immediately entered the jewelry business, becoming a national account manager for A & Z Hayward. In 1990, he formed his own business, the Henderson Collection.

He was a founding member and board member of both the Luxury by JCK and Centurion Jewelry shows, as well as a board member of the 24 Karat Club of the Southeastern United States.

A Facebook post from his company said that Henderson “loved his place in the jewelry industry, the friends he made along the way, and seeing the excitement on the faces of everyone who collected his jewelry.

“He was a true road warrior—the most generous man who treated everyone like family, regardless of how long he knew them,” the post continued. “Gregarious, fun, and always ready for a good belly laugh, he will not only be an immense loss to our office/family, but also to our industry and his many friends across the nation.”

Ann Gieser, vice president of the Henderson Collection, says that “he was a true friend to all…from the shoeshine guy at the airport to the acai bowl attendant to friends and those in high places.… He treated everyone with respect. Everyone will tell you he was the hardest-working man in the industry.”

A 2012 JCK article describes his committed work ethic, noting that, during the prior year, he had sent out over 2,800 packages to clients and hosted 90 trunk shows.

Henderson was a deacon at his church, Myers Park Presbyterian Church, in Charlotte, N.C. He was past president of both Leadership Charlotte and the local Historic Properties Commission.

He is survived by his wife of 39 years, Kathy, and his three children, William, Andrew, and Elizabeth.

In lieu of flowers, the family requests that donations be made to A Child’s Place, which supports homeless children and their families.

(Image courtesy of the Henderson Collection)