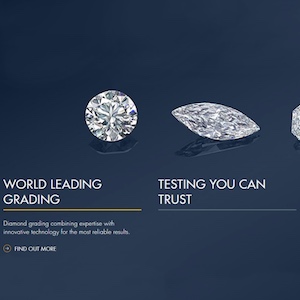 The renaming will make “things clearer and simpler for customers, and […] make the business’s position as part of De Beers Group more obvious,” Johnson says.

The renaming comes with the launch of a new De Beers Industry Services site, which premiered in June.

Also under the Industry Services umbrella is De Beers Group Technology, which develops synthetic diamond detection equipment, and the De Beers Group Institute of Diamonds, which offers a range of education courses.

The Institute of Diamonds, which debuted in 2017, has three campuses, at Maidenhead, United Kingdom; Antwerp, Belgium; and Surat, India. Last month, it announced it was partnering with the International Institute of Gemology in India to offer its Diamonds Foundation Course through India.

De Beers Group Industry Services also has offices at each campus location. The Technology group is based in Maidenhead.

De Beers first opened up the grading lab in 2008. Originally it only graded diamonds for De Beers’ Forevermark brand. It soon expanded into private-label grading. In 2016, it opened to the trade at large.

The name change was long anticipated, particularly after De Beers bought out LVMH’s share in the De Beers Diamond Jewelers retail chain in 2017. Prior to the purchase, the retail chain had the sole right to use the name De Beers commercially.

The purchase was “more than just buying that business back, it’s buying the [De Beers] name, and then working out what we do with the name,” De Beers CEO Bruce Cleaver told JCK shortly afterward. “It gives us more flexibility to use our name in any number of ways, whether it be wholesale, or whether we rebrand some of the businesses in our portfolio, which you may have noticed bear some interesting names.”