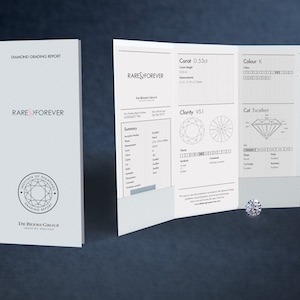 De Beers Group Industry Services, the diamond giant’s grading lab, is entering the U.S. market for the first time through a new partnership with RDI, the Rochester, N.Y.–based diamond wholesaler.

The De Beers reports will accompany all of RDI’s Rare and Forever branded diamonds. RDI will be, at least for now, the only U.S. company to offer the reports.

“[Our] focus to date has been mainly been in Asia,” says De Beers Group Industry Services spokesperson David Petrie via email. “Our partnership with RDI marks the first time that we will be offering our grading services to a wholesale diamond company in America. However, we look forward to entering more partnerships in America in future.”

As far as opening a take-in window or actual lab here, Petrie says “there are no plans to do this at this time.”

Michael Indelicato, RDI’s chief executive officer and founder, says his company—which isn’t a sightholder—embraced the De Beers reports because “we felt the market is ripe for another lab that is very consistent and very accurate.”

De Beers Group Industry Services claims its lab has the most consistent grading in part because it uses “proprietary color and clarity [grading] machines,” backed by human judgement.

Indelicato thinks the consumers will respond well to the report.

“De Beers is a better-known [name] to the consumer than the name of any other lab,” he says. “The fact that De Beers’ name is on the report puts it that much ahead.”

“People are frustrated with the accuracies and inconsistencies,” he says. “What they’re saying is there is such a vast difference in G SIs.”

He adds that, since the reports aren’t currently offered online, they will be harder to comparison shop.