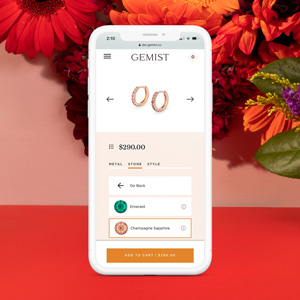 The possibility of a “Warby Parker for fine jewelry” debuting and disrupting the status quo of jewelry retail has been anticipated within the industry for years.

Why? Despite impressive individual efforts to nudge it forward, fine jewelry retailing—which represents the last of the independent retailers in many U.S. cities and towns—is as a whole in need of modernization.

Direct-to-consumer digital jewelry brands such as Frank Darling, Rocksbox, and AUrate have innovated in the space with slick, easy-to-navigate websites that allow for limited customizations. All three offer try-at-home boxes of jewels, in the style of pioneering eyeglasses retailer Warby Parker.

But Gemist, a direct-to-consumer jewelry brand and digital platform founded by tech industry veteran Madeline Fraser in 2019, has taken those innovations a few steps further.

The direct-to-consumer platform gives jewelry lovers the opportunity to “design” their own engagement ring (and other jewelry) by choosing from a wide selection of options. Any engagement ring or piece of fine jewelry can be tweaked in several ways, by choosing from a menu of metals and gemstones and sometimes manipulating elements such as the amount of diamond pavé on a shank.

Once the style is finalized on-screen, customers can request that a silver prototype of the design be sent to them at no cost, so they can live with the piece before committing to paying for the ring, which will be produced in 14k gold.

Even without its customization machinations, Gemist’s stylishly sterile interface and free, at-home try-ons make it a veritable Warby Parker of fine jewelry. And like the disruptive eyeglasses brand in its early days, Gemist has attracted venture capital, which in Warby’s case allowed it to open shops in nearly every “A” shopping center in America.

Does the Los Angeles–based jewelry startup have the potential to grow as broadly? The world’s biggest diamond producer seems to think so.

The startup is already backed by several hotshot venture capital firms, including Legendary Ventures, Lightspeed Scout, and Luma Launch. But De Beers’ investment goes beyond funding. As part of the deal, the diamond manufacturer will work with Gemist on consumer engagement approaches, “particularly with regards to responsible sourcing of natural diamonds,” according to the statement.

And Stephen Lussier, De Beers Group executive vice president and big thinker in the branding space, will join the Gemist board of directors.

The brand has been collecting prominent supporters since the beginning. JCK‘s Amy Elliott wrote about Gemist in November, shortly after it debuted. And at the time it was notable that former Elle editor-in-chief Robbie Myers, who is well-respected in editorial and fashion circles, was acting as an official adviser to the Gemist team.

“Gemist is a first-mover in offering Gen Z and millennial consumers a unique shopping experience with fully customizable designs through a simple, engaging, and fun platform—key features we know these consumers are looking for,” said Neil Ventura, executive vice president of strategy and innovation for De Beers Group, in the release. “We look forward to working with Gemist to share mutual insights as the business continues to grow.”

And we look forward to seeing how Gemist, supported by substantial capital and now the diamond industry’s heaviest hitter, continues to change the game.