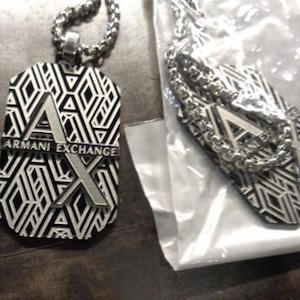 The first shipment originated in Shenzhen, China, and was headed to a private residence in Norcross, Ga.

If the pieces had been genuine, their total manufacturer’s suggested retail price (MSRP) would have been $8,419,017.

The second shipment came from Hong Kong and was headed for an unnamed individual in West Palm Beach, Fla. It contained 113 counterfeit Cartier bracelets. If the pieces had been genuine, their MSRP would have totaled $1.17 million.

The items were determined to be counterfeit by CBP’s Centers of Excellence and Expertise.

This is not the only action CBP has taken recently with regard to jewelry shipments.

In November, CBP seized a package worth $20.7 million in jewelry, which a Canadian citizen had intended to send to a New York City auction house, because its contents had not been declared properly at the U.S.–Canadian border.

Top: Some of the seized fake Armani jewelry (photo courtesy of U.S. Customs and Border Protection)