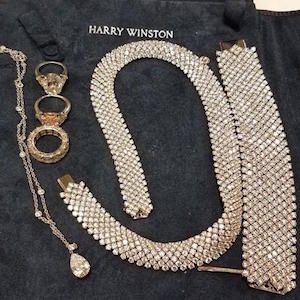 The package contained $20.7 million in jewelry and was from a Canadian citizen, meant to be delivered to a New York City auction house for appraisal and eventual sale.

But according to U.S. Customs and Border Protection, the jewelry in the package—some of which was apparently marked “Harry Winston”—was not properly declared at the U.S. border, and now the millions of dollars’ worth of jewels the package contained are in the agency’s possession.

According to CBP, a Canadian courier service was hired to transport the package to a Detroit-based contact, who then hoped to send the package to the auction house.

The CBP release doesn’t specify if the agency received a tipoff or if customs officers simply searched the courier service’s car as it crossed the border. But when the officers at the Detroit-Windsor Tunnel discovered the millions of dollars’ worth of undeclared jewelry in the driver’s car, the package was seized. The driver claimed no knowledge of the package’s contents.

Kris Grogan, public affairs officer for CBP, tells JCK via email: “The owner of the merchandise attempted to circumvent U.S. trade law with the attempted import of undeclared and unmanifested high-value personal property with the intent to appraise and enter it into U.S. commerce.”

Asked what lessons this incident could hold for the industry, Grogan says: “People need to be aware of importation processes and to be honest about what they are bringing into the U.S., and provide a legitimate value for those goods. Travelers and industry representatives should recognize and account for potential tax and duty assessments.

“When in doubt, give us a call,” Grogan adds. “Attempts to circumvent the law for the sake of convenience or fiscal gain or otherwise, while tempting to some, is usually going to cost the offender more in the long run.”

Says Tiffany Stevens, president and CEO of the Jewelers Vigilance Committee, “Getting caught up in a seizure can be time-consuming and very costly. We hear enforcement is up across the board in reaction to many issues in this time of chaos. It’s always important for those in the jewelry industry to be sure and have the proper documentation when crossing borders with goods.”

Other information is available at CBP.gov.