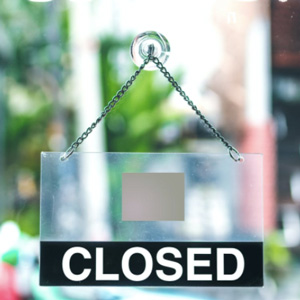 Now several are collapsing. An astounding 24 major retailers have filed for Chapter 11 since March. And according to data analytics firm Coresight Research, more than 6,000 brick-and-mortar stores have already closed in the United States in that same time period.

The tidal wave of Chapter 11 closures really began when Neiman Marcus, J.Crew, and J.C. Penney filed for Chapter 11 in May. June delivered a slight pause, with only two retailers, GNC and Tuesday Morning, filing.

So far in August, Lord & Taylor, Stein Mart, and Tailored Brands (which owns mens’ apparel retail chains Men’s Wearhouse and Jos. A. Banks stores), have all filed for Chapter 11.

More will likely follow. Imperiled U.S. retailers including J. Jill, Blue Apron, and Wayfair have defaulted on their debt payments in recent months, according to S&P Global, putting them at risk for (or on a planned track to) bankruptcy.

Factors impacting the fragile health of U.S. retail are manifold—and interconnected. The pandemic and its ensuing lockdowns forced consumers into their homes, which drove down demand for goods other than essentials (groceries, gas). Entertainment and recreation spending was vanquished—and restaurant sales plummeted—in the span of a couple of few weeks.

Online shopping became the only shopping avenue for many consumers, especially in infection hubs including New York City and Los Angeles. As collective ennui set in, apparel, accessories, and fine jewelry sales picked up again, mostly online. But retailers with cumbersome or friction-filled e-commerce sites (including J.Crew, which still charges consumers shipping costs), lost sales to e-comm giants Amazon and Walmart, among others.

While many parts of the United States have reopened for business, an uptick in COVID-19 infections in many regions may be coming, according to the CDC, precipitated in part by the start of the school year. The consequences of a second wave, for some retailers, could be dire.