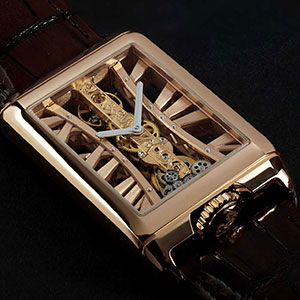 Soon you may need a scorecard—or at least a heavily annotated floor map—to determine which watch companies will exhibit at the next Baselworld and which have dropped out.

On Oct. 8, Corum became the latest brand to announce that it will not participate in the Swiss fair, traditionally the largest and most prestigious event on the watch calendar. The brand joins Raymond Weil and the Swatch Group, which have both said they will sit out the next fair.

A Corum spokesperson tells JCK that while Corum won’t attend next year, it could return at some point.

“Very much depending on the concept developed by the fair, we will not close the door,” the spokesperson said.

In a statement, Corum CEO Jérôme Biard admitted that even a temporary timeout marks “the end of a major chapter” after 62 years of attending Basel.

“We are working hard, with positive results, to get Corum back on the path of its golden age, when Corum took the first position at the entrance of Baselworld,” he said. “Today, our main objective is to focus on the real ‘ambassadors’ of the brand—retailers, final customers, and journalists. We therefore need to change our approach and invest the budget in other ways.… [Our] 2019 and 2020 strategy is to organize more intimate and well-targeted events across three continents.”

Meanwhile, LVMH’s watch group has committed to attending next year’s Baselworld, though, in an interview last week, nonexecutive chairman Jean-Claude Biver admitted he shares some of his fellow watch executives’ reservations.

“I agree with Swatch Group that the fair has never adapted to the 21st century, it is true,” he told CNN.

He added that Baselworld should take place at the beginning of the year, rather than in March, and hotel and fair prices needed to come down. He hoped to work with management to address these issues.

“If we cannot find solutions…probably, we’ll leave,” he said.

Baselworld is launching a slew of new initiatives in response to the defections, including the establishment of a new jewelry hall. In the most recent Baselworld newsletter,  managing director Michel Loris-Melikoff said the fair’s “bookings are slightly above last year’s level, which is a positive and encouraging signal.”