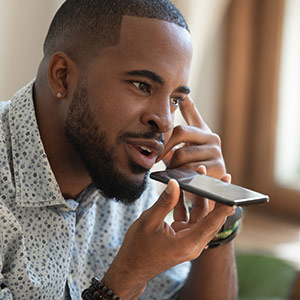 Late last year I shared a list of expert-predicted social media trends for 2021, and one of them, referred to as “old-school marketing,” placed a large emphasis on voice.

We’ve seen voices have a big impact on the products we consume: podcasts, talk-to-text features, and even the new voice tweets. But the new It social media platform (dubbed as such because it’s incredibly exclusive at the moment and therefore in demand) makes using your voice its main purpose.

Clubhouse, the name of the new audio-based social media app that was first introduced back in May 2020, describes itself as “a new type of social product based on voice [that] allows people everywhere to talk, tell stories, develop ideas, deepen friendships, and meet interesting new people around the world.” The app features chat rooms, except instead of typing, you use your voice to talk. Its pull: imitating real-life interactions when they aren’t quite so possible, and giving people the opportunity to network and connect.

In today’s current climate (and perhaps this has always been the case online, really), it’s not surprising to hear the early controversy surrounding the app. If its founders thought having to use a voice rather than hiding behind a keyboard would deter vitriol on its platform, well, sadly that’s not been the case (note that conversations held on Clubhouse disappear after the chat session ends, and are not saved for listening to later).

As the New York Times recently reported, many who use Clubhouse have publicly complained that the app has failed to provide sufficient protections for users, particularly those from historically marginalized backgrounds. Vanity Fair dedicated coverage to the anti-Semitic speech and misogynistic and racist harassment that’s occurred on the app back in December 2020.

Still, Clubhouse is drawing all sorts of high-profile celebrities, venture capitalists, and journalists to participate in a series of discussions and presentations.

Clubhouse is also a place for a new type of influencer. Rather than using the app to post about savvy style and enviable vacation destinations, these influencers flock to Clubhouse to excel in other ways. “The top creators are people with magnetic personalities who attract audiences not just because of their titles and accomplishments, but because listeners want to spend time intimately hearing their thoughts with a chance to weigh in themselves,” early-stage investor Josh Constine told the New York Times. “These creators are generating big audiences on Clubhouse even if they don’t have large followings on other social platforms.”

Currently, you cannot get on Clubhouse without an invite. But this exclusivity doesn’t mean you won’t get your chance at some point (I remember when Google+ was invite-only and securing an invitation was like winning the lottery, and we see how well that all turned out, right?). Clubhouse says that it plans to expand to the public “as quickly as possible,” currently remaining in beta as it irons out the kinks (hopefully it works out some of its moderation issues?). A statement from the app on the matter—from July 2020—reads as follows:

“On every platform there are bad actors. As we move beyond the beta group, we’ll need better tools to protect people. On Clubhouse, there are some nuanced things to figure out. What does it mean to block one person in a conversation where multiple people are talking? Should we store conversations on our servers to help us investigate future complaints? We are shipping important privacy and blocking features later today, but before we launch widely we’d like to add better in-app reporting and a clearer process for investigating complaints.”

Based on recent reports referenced here, it does not seem like things have much improved since that statement was made six months ago. Still, Clubhouse is an exciting new venture that has the opportunity to generate meaningful conversations and foster connections, so let’s see where it goes.

Have you gotten an invite to Clubhouse? What has your experience with the app been like?