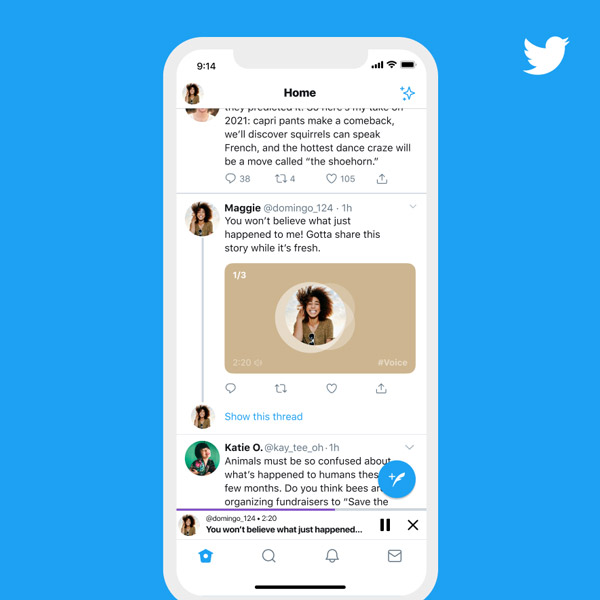 Twitter has allowed for a lot of conversations to take place online (some good, some terrible), with added features to amplify those conversations, akin to what we do with text messages. Add a GIF, and things are instantly more humorous. Add a photo or video, and you might not need quite so many words. Now the social platform is introducing a new option (currently in test mode) that enables users to tweet with their voice, lending a storytelling element to the experience that wasn’t quite there before.

Much like with text, sometimes tweets get lost in translation. You can’t always convey your emotions or intentions with a mere 280 characters and maybe a video. Sometimes, without proper inflection or emphasis, a tweet or text can be misunderstood or misread. Sarcasm? Forget it. Sure, it works sometimes, but if that doesn’t get picked up the way you intended it, you could end up rubbing many people (customers) the wrong way. And if you don’t think you read into the language behind texts, just think about how you felt the last time a friend texted a simple K or (gasp!) used a period at the end of the sentence. You know what that means—you’re racking your brain to figure out why they may or may not be mad at you (or, you wonder if you’re overreacting).

There’s also the fact that sometimes 280 characters just aren’t enough to hash out the details. How often have you seen someone tweet (or Instagram) a screenshot of their thoughts written down on their notepad app?

I like the example that Twitter uses from its blog in the image above. A user experiences something exciting and wants to tell followers the story, much like we would recall a particularly memorable encounter to our friends. It’s much easier to capture the nuances of the story using our voice rather than  typing the words.

What does this mean for jewelers, though? Well, a few things. Just like with telling the story of a recent happening, I can see this new feature being put to good use to tell the story of a product, a store event, or a charitable cause. Much like we enjoy a behind-the-scenes angle through Instagram Stories, I think this is Twitter’s version, in a way, that lends a more personal, less interpretive touch.

Not everyone seems totally thrilled with the new feature. Valet.‘s digital newsletter, the Daily Valet, shared a small blurb on its experience, calling it “the ‘human touch’ no one seemed to ask for,” writing that the audio tweets felt “a bit off…like suddenly everyone has a mini-podcast.” The publication did acknowledge, however, that it could become more natural in the long run, once we all get used to it. Besides, if everyone can have their own mini YouTube channel on Instagram, why wouldn’t everyone be able to host their own podcasts?

The feature is currently available only to a select number of users on Twitter for iOS, but Twitter says that in the coming weeks, everyone on iOS should be able to tweet with their voice, as well as see and reply to the tweets.