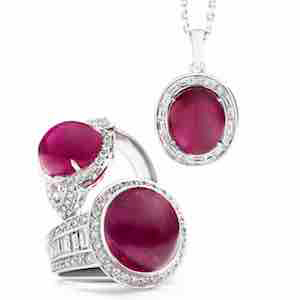 For the last few years, Greenland Ruby vice president of sales and marketing Hayley Henning has touted the bright-red rubies and pink sapphires produced on the world’s largest island. She’s found that many people have heard of Greenland, but few know much about it.

Until now. Henning was as surprised as anyone when Greenland hit the headlines recently, after President Donald Trump said he wanted to buy it.

It all began on Aug. 16 when The Wall Street Journal quoted the president’s advisers as saying he had become increasingly fixated on purchasing the Danish territory, even if it was “unclear” whether that was possible.

It was also unclear how serious he was, and when Greenland’s minister of foreign affairs declared that the island was “not for sale,” most assumed that would be the end of it. But this week, the president sent out a barrage of tweets indicating that he really did have his hopes set on a purchase. The idea’s quick, if foreseeable, demise even sparked an international incident, when Trump canceled a meeting with Denmark Prime Minister Mette Frederiksen because she dismissed the idea as “absurd.”

Henning says that while she doesn’t want to get political, her colleagues in Greenland have found the affair “pretty hysterical.

“It’s a pretty crazy idea,” she says. “Greenland is an independent country. They are autonomous from Denmark. Everyone thought it was really funny, and then it turned out he was actually serious.”

Greenland Ruby, which is owned by a Norwegian company, has referenced the fuss on social media, noting that “Greenland isn’t for sale, but Greenland’s rubies are.”

Greenland isn’t for sale – but Greenland’s rubies are, one carat at a time! We’re ruby’s newest source! Our ruby deposit is in the oldest on earth – 3 billion years old! Greenland Ruby is one of the first operational mines on the island. Learn more at https://t.co/UHTip5k4Gh. pic.twitter.com/adQYBQP1oi

Henning hopes all of this has raised some awareness of the country—and possibly her product.

“I’m delighted by the publicity,” she says. “People have been texting and emailing me all week, in a very jovial way.”

She says the island is mostly an icy land mass.

“They compare it to Iceland, which is nearby, but they are very different. Greenland is ice, but Iceland is green. It’s a beautiful part of the world, untouched, pristine. It’s a huge land mass, but just a small population inhabits the island.”

The temperatures can vary from somewhat hot to extremely cold—and parts of the island have been seriously affected by climate change.

The Aappaluttoq mine began producing rubies in May 2017. Even before this, Henning says the industry has welcomed the product.

“It’s a new, responsible source of ruby,” she says. “Origin is an important topic in our industry.”

So will all the publicity help? No one knows. But at least “people who don’t know much about Greenland have now heard a lot about it,” says Henning.

The United States will almost certainly never buy Greenland. But Henning hopes, now that the island’s profile has been raised, more Americans will buy a certain scarlet-hued export.

Top: A ring with Greenland rubies manufactured by Hartmann Jewelers (all images courtesy of Greenland Ruby)