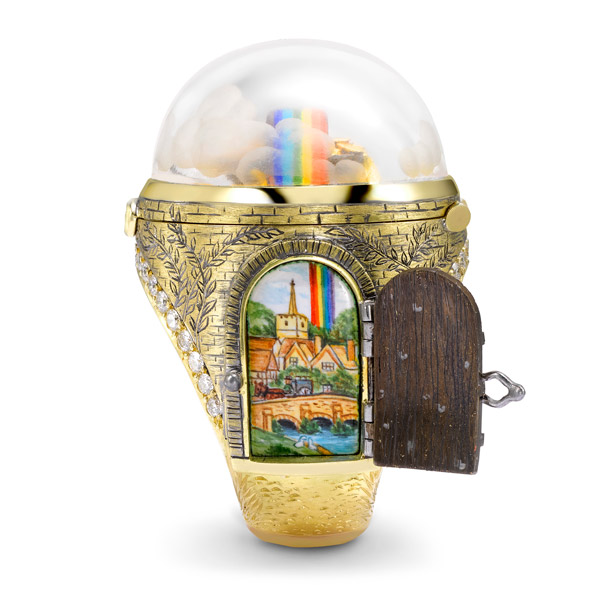 I recently wrote about star jewelry, a meaningful breed of pieces that feels necessary always, but especially right now. While I count the stars among my favorite jewelry icons, they aren’t the only sky-high symbols to be considered uplifting.

Rainbows are unmistakably inspiring, there is simply no other way about it. What they inspire varies from person to person—maybe the combination of colors brews excitement or energy, it might represent hope to someone else, or the sight one longs to see after weathering a storm.

It represents a movement: The rainbow flag has been symbol of gay pride since the ’70s. It’s in the Bible, in religious art, it’s prominent in tales of folklore. Dorothy sang about it, so did Kermit the Frog. The rainbow is for so many an important icon. Even for those who seem immune to its symbolism, its appearance is undeniable.

In the age of COVID-19, the rainbow has once again shown its power. The recent #904RainbowHunt, a movement started by a nurse in Florida, caught fire around the country, inspiring the hopeful to decorate their windows in beautiful rainbow-themed art, a sign of hope and endurance to help us through the storm.

This time of year, as Pride month is just around the corner, we typically get a glimpse at the rainbow flags hung in the windows of businesses and restaurants and experience the joyous celebration of parades and events. That’s going to look a little different this year. But the rainbow as a symbol of not only a celebratory month for the LGBTQ community, but also for the entire planet, will prevail.

And so rainbow jewelry, ever beloved, is all the more clamored for. And I can find countless examples of this, there are many, many good options on the market. One such jaw-dropper comes from British jeweler Theo Fennell, no stranger to this blog (and a brand our own Amy Elliott recently covered in the designers efforts to raise funds for COVID-19 relief).

This particular piece, a bespoke one-of-a-kind ring, is dubbed Over the Rainbow.

This piece, one in a series of highly detailed rings that open to reveal an inner treasure, is not new. In fact, the creation was covered by The Jewellery Editor as far back as 2015, so I won’t be breaking any news here. But it’s worthy of revisiting, not only for its timeless ability to please, but also for its current relevance and renewed fervor.

Encased in a rock crystal dome beams our rainbow, sailing high over a fantastical, almost medieval-looking village. On each side of the ring, a door opens to reveal such a scene, hand-painted in enamel. Open the dome to find the treasure waiting at the end of every rainbow—a miniature pot of gold, incredibly detailed down to the last tiny, precious metal coin.

Rainbows are the kind of natural occurrences that can spur such stories as the one that inspired this ring (the legend that there is a pot of gold at the end of every rainbow). And the care and exquisite detail that went into retelling it here is beyond flattering of such a symbol, one that we hold in such high regard. May we all continue to hold out for our rainbows, and in the meantime, may we enjoy the creations so worthy of them.