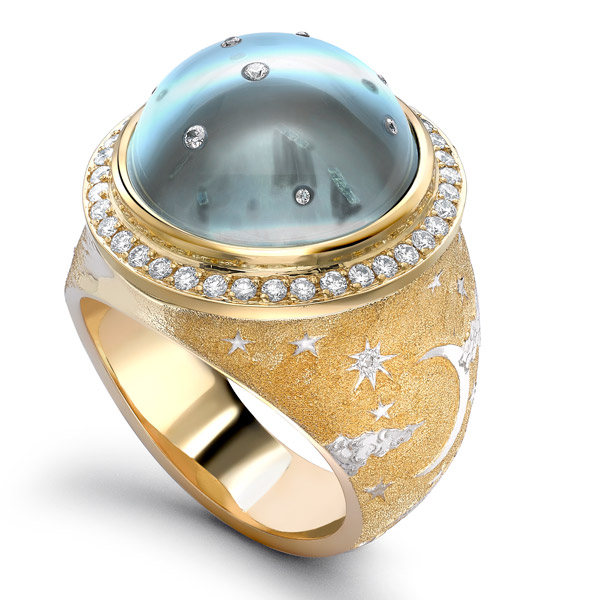 We may be moving into the holiday season, with winter blowing in closely behind, but here’s a piece that will keep the days of summer literally at hand, with a travel twist that could have you planning your next vacation.

Much mystery surrounds this Neolithic monument, with differing theories on when precisely it was built, how it was built, and what it was used for. Many sources pinpoint its construction to be around 3,000 B.C. and have found evidence to suggest the site was used for everything from celebrations and ceremonies to worship and burials. Scholars believe that the site, in its entirety, was built over a period of 1,500 years.

This world heritage site is much larger than the series of stone arches I had pictured—it even includes a number of burial mounds, appearing like solid little huts—and it could easily take a visitor at least two hours to take it all in. But with this ring, Fennel gives us a bird’s-eye view of Stonehenge through his miniature to-scale version handcrafted in gold.

To explore this little land, one needs to open the ring’s roof, a bulbous blue topaz reminiscent of the sky, dotted with diamonds that represent the smattering of stars that remain as night turns to dawn.

The body of the ring also illustrates this pattern, hand-engraved on one side with a crescent moon, and on the opposite side, a blazing sun. Stars and clouds detail the sides as well, culminating in a spectacular sky scene against a background of yellow gold.

Summer Solstice, which took more than 6 months to complete, celebrates June 21, when each year, visitors to Stonehenge gather to watch the sunrise over the prehistoric stone circle. It is this longest day of the year, and the sun aligns perfectly to the monolith’s center. About 10,000 people visited to witness the phenomenon in 2019.