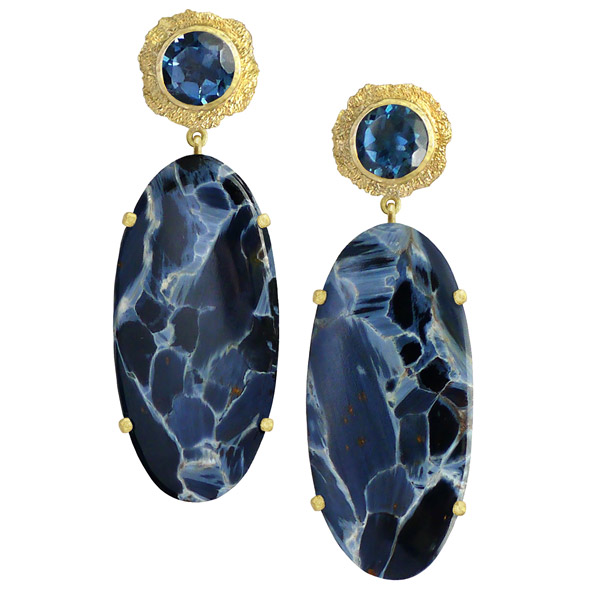 When Pantone made the announcement that Classic Blue would be its official Color of the Year for 2020, I immediately thought of sapphire. When it comes to jewelry, there’s nothing more classic and reliable than sapphire, Classic Blue’s gemstone counterpart if there ever was one.

For those longing for something a bit less familiar (many have deemed Pantone’s selection boring), these earrings from Nashville, Tenn., jeweler Laurie Kaiser are the furthest thing from expected.

A recognizable shade of blue—one so beloved and often demanded in jewelry—this particular iteration comes from pietersite, a stone that couldn’t be any more unusual to me. A visit to GIA’s website tells me that pietersite is “a brecciated variety of tiger’s eye,” named so by gem and mineral dealer Sid Pieters in 1962. Its main sources are reportedly Namibia and China, and it is recognized by its “bundled” bands, with “a brecciated texture that has been likened to bold paint strokes that flow in many directions,” according to a study found in GIA’s Winter 2010 Gems & Gemology quarterly journal.

“Pietersite is sometimes referred to as the ‘tempest stone,’ as the swirling colors in the mineral can look like a storm,” says Kaiser. “I was drawn to this dark, stormy look.”

I see brushstrokes and raging white waters in an icy river of blue, but I also get a sense of comfort from the stone’s patchwork-like qualities—it reminds me of a blanket to wrap yourself in all winter long.

Pietersite isn’t always blue—variations from GIA show me everything from red to orange to earthy browns and greens—though the blue varieties are said to most commonly come from Namibia. Kaiser, who often dazzles with stones that appear like naturally occurring paintings, has worked her magic once again to do this one immense justice, and in the process she has expanded my knowledge of gemstones (as well as the items on my wish list).

Unfamiliar and exotic as they may be, this pair still shares Classic Blue’s comforting reliability, their universal hue ensuring versatility that will promise to be easy on the eyes for a long, long time—instant classics in their own right.

Proving that although a shade of blue may be common, an uncommon twist can take even the most classic colors to levels out of this world.