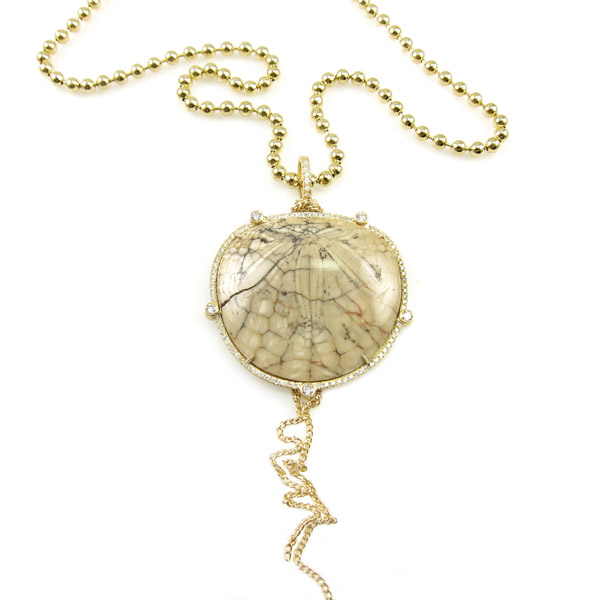 In keeping with the theme of jewels that make us feel good, I’m excited to talk about this distinctive treasure from California jeweler Nan Fusco.

Fusco is based in Laguna Beach, a place that I’d happily be transported to, if teleportation could only be a reality, so I could just take a few hours—even a few moments—in the salty sea air. I close my eyes and try to make it happen, at least mentally.

I hear the waves crashing on the shore. Not far, two seagulls squawk, probably fighting over a shell-less crab. There’s a light breeze, just enough to make the sun feel welcome, not overbearing. A song by Hilary Duff begins to play. No wait, that’s the opening credits to the Laguna Beach show from MTV.

But on my screen, a remnant of the sea, one that makes me feel warm, and brings to mind idea of magic, maybe even fairy tales.

Immediately upon seeing Nan Fusco’s pendant, I thought of The Little Mermaid. Because: 1) of course, I would find a relation to Disney in everything; and 2) because how can you look at this piece and not think it contains something as sacred as the voice of a mermaid? Sure, in the story it was stolen by a witch, but there’s nothing sinister about this jewel. Okay, so I also see in this the locket from Harry Potter—another sinister object, if you’re familiar with the books or films—but seriously, this is just pure goodness. And, if anything, it has inspired me to have a Harry Potter movie marathon, which is, in fact, a very good thing.

The (good) magic of this one-of-a-kind piece can be attributed to its fossilized sand dollar, an object that hit the jackpot and ended up in a beautifully crafted piece of jewelry to be admired forever or longer. Four hundred million years on earth to be surrounded by diamonds and golden fringe? A proper tribute to its antiquity.

“I am obsessed with these 409-million-year-old fossilized sand dollars, which are unearthed in Kettleman Hills, Calif.,” the designer tells me. “Recent restrictions prevent any more digging, so the ones I have are quite treasured.”

The rare becomes even rarer, so perhaps there is some true magic in this piece after all.