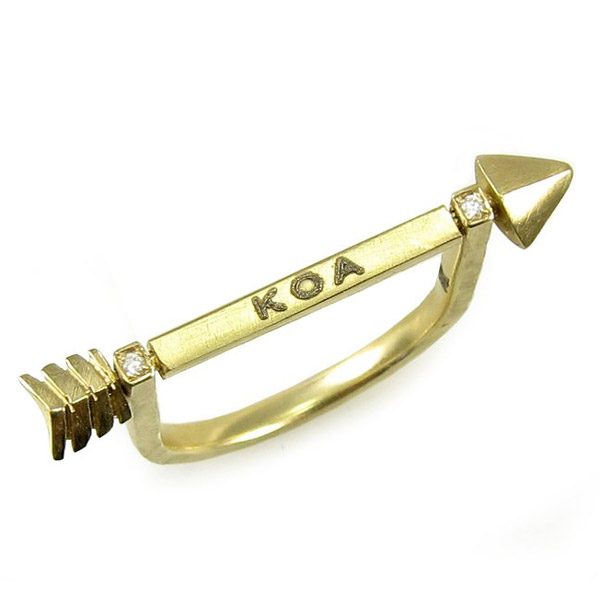 A piece of jewelry can mean so much to an individual, whether it represents a special moment in their lives, commemorates a birthday or anniversary, celebrates love, functions as a mantra, or just serves as a pick-me-up when one is needed. When designers can create rings that do one or more of those things, while also contributing to an important cause, that’s quite an accomplishment.

The Koa Warrior ring by Laguna Beach, Calif., designer Nan Fusco does that, though I’m certain it isn’t a piece she ever wanted to create.

Recently, Fusco’s 32-year-old daughter, Erin, was diagnosed with pancreatic cancer—a disease that’s rare in people under the age of 40 and one that has a grim survival rate.

Still, there’s hope. A warrior at heart, Erin is ready and willing to combat her diagnosis, and her mom, the designer, is using her tools to join the fight, too.

Using her art to honor Erin and to drive awareness of pancreatic cancer, Fusco has created the Koa Warrior ring, a diamond-dotted spinning arrow design. On one side of the arrow sits a line of round brilliant diamonds, while the other side is engraved with “Koa,” which is Hawaiian for “the strong, brave, and fearless,” or, as it is more simply translated, “warrior.” The handmade ring is available in 14k yellow or rose gold.

“When I decided to design a piece, I started searching for symbolism that would apply to my daughter,” says Fusco. “I saw her crumble when she was first diagnosed, then watched her rise to the occasion, embrace the science of her treatments, and face this like a true warrior. She is so fierce, and I am so proud of her!”

Taking inspiration from her daughter’s warrior-like attitude, the designer was led to the arrow and then onto the idea of an arrow that spins. “I researched to find that a spinning arrow through a diamond represents courage as one moves forward through a journey. What could be more perfect than that?”

When I asked Fusco of the Hawaiian origins of her ring, she told me the choice was an homage to a friend who lives there—a cancer survivor. In addition, “the Hawaiian warrior represented the ultimate in bravery and excelled in the art of combat—I liken this to my daughter Erin who is now in the midst of the battle of her life,” she says.

While the what of the ring—its powerful and alluring design—is gripping on its own, the how and why are even more so. And, as we near closer to November, which is Pancreatic Cancer Awareness Month, it’s important that Fusco does her part to spread the word. That she does so through the beauty of her work—for which all profits go to pancreatic cancer research—lends a tangible element to the crusade.

“As a mom, I felt compelled to do something to help my daughter, so I put my efforts into creating a relevant piece that would help raise awareness and potentially find a cure,” Fusco continues. “My greatest hope is that each time someone wearing the Koa ring gets a compliment, they will share the story and it will create a domino effect. I’m a mom on a mission—my daughter’s life hangs in the balance.”