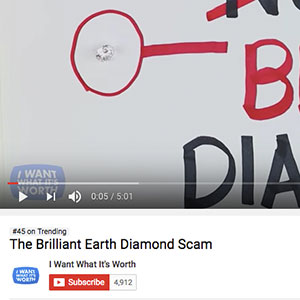 Brilliant Earth has ended its three-month-old defamation suit against Jacob Avital, who produced a series of videos casting doubt on the company’s sourcing claims.

The suit was discontinued with prejudice and without any costs or disbursements, according to a notice filed Oct. 27 in New York Supreme Court.

While it’s not clear if any settlement was struck, the three videos Avital posted slamming the company—two of which mentioned the legal action—all appear to be have been taken down.

Avital also goes by Jacob Worth and owns a second-hand diamond company called I Want What It’s Worth. His videos racked up thousands of hits after landing on the front page of popular discussion site Reddit.

Neither Avital or his attorney responded to requests for comment by JCK. Brilliant Earth CEO Beth Gerstein said simply, “The matter has been resolved.”