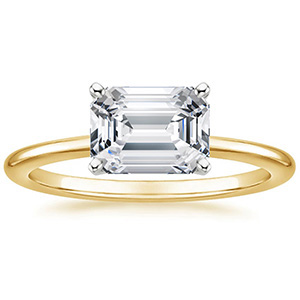 The lab-grown diamond category is a competitive one for advertising on Google paid search, but the advertising there is still small compared to other jewelry segments, according to new research from Kantar Retail.

“We observed 160 advertisers appearing on the keywords in product-listing ads from January through October 2019 and 307 advertisers appearing in text ads,” says Jim Leichenko, director of marketing for Kantar’s media division. “Neither is an insignificant number, considering we can see as few as 30–50 advertisers on some popular retail product keywords.”

However, that is not a high number of advertisers for the jewelry category as a whole, which tends to attract a lot of search advertising, he says.

“We measured 3,455 product-listing-ad advertisers and 2,889 text-ad advertisers appearing on 419 popular jewelry keywords on U.S. Google from January through October 2019,” says Leichenko. “Altogether, this data suggests to me that lab-created diamonds are competitive in paid search but still a niche category in jewelry.”

Overall, the company found that Brilliant Earth dominated paid search advertising for lab-grown-related keywords—including lab-grown, lab-created, and man-made—gathering 37% of all product-listing clicks and 21% of all text-ad clicks.

(Product-listing ads are visual ads derived from a company’s inventory that show a product, its price, store name, and a link.)

Some of the companies that come up for “lab-grown diamond” search terms don’t sell lab-grown diamonds. For instance, Kantar found that Charles & Colvard’s ads appeared on searches for lab-grown diamonds, even though it sells moissanite, which is a non-diamond look-alike known in the gem world as a simulant. (Cubic zirconia is the most common simulant.) Diamond Nexus also sells simulants, which it calls “diamond alternatives,” though it offers actual lab-grown diamonds through a separate division.

A few companies sell both, but the product-listing ads that appear under “lab-grown diamonds” sometimes lead to pages that sell simulants.

Also making a surprising showing: realisadiamond.com, the site for the Diamond Producers Association, the group of diamond miners. Its site ranked fifth as far as text click-through.

In jewelry advertising overall, perhaps not surprisingly, the search term that gathered the most advertising was engagement ring.

Paid search for engagement ring unearthed a completely different list of names than the lab-grown segment, though Brilliant Earth made an impressive showing there, too, Kantar found.

So how are these numbers derived? While click-through numbers are generally known only to Google and the advertiser, Kantar uses a proprietary algorithm to determine click rates, based on the idea that Google spotlights ads with higher click-throughs.