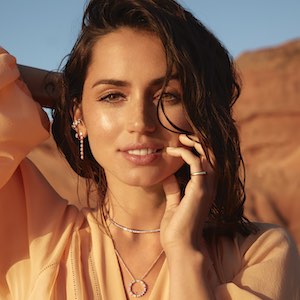 The Natural Diamond Council’s new ad may not seem all that unusual. It features Ana de Armas, this year’s Bond girl (she costars in No Time to Die, which will be released in November), frolicking on a Portuguese beach with her mom and man.

Yet its tagline—“For moments like no other”—also describes the very strange time during which it was filmed. Everyone on the July shoot was repeatedly tested for COVID-19. Camera operators wore masks, and Portugal was picked for its low viral spread.

“Obviously, we had to do a lot of work beforehand, on testing, on health, travel, and safety,” says NDC CEO David Kellie. “Big shoots are complicated even during the best of times. But you lay on the fact that people are traveling in the middle of a crisis, it was challenging. Hopefully, the outcome will make it worthwhile. We believe we are one of the few luxury brands that was able to shoot a major campaign for the season.”

The 30-second spot, which will debut during the first hour of Sunday’s Emmy Awards, is the NDC’s first campaign since Kellie took over the diamond miner group in January. He wouldn’t disclose its budget but says it’s “significant,” aiming for 700 million impressions. Its target is women, ages 21 to 49.

“That group hasn’t really been communicated to all that much lately about the emotional connection of diamond jewelry,” he says. “We want to remind consumers that diamonds celebrate moments, and specifically relationships—whether it be with a partner, friends, or family. You don’t see that association with other luxury goods. It’s what we see as the key differentiator for diamond jewelry, at any time—but it’s even more meaningful during this crisis.”

Cuban actress de Armas will not only appear in the new James Bond film, but she’ll play Marilyn Monroe in the Netflix film Blonde, which will be released in 2021. Of course, diamonds have long been associated with both Bond and the famous blond. That’s a coincidence—but a happy one, says Kellie.

“I can’t say that didn’t enter into our thinking. It’s nice to have. But there were a lot of different things that made [de Armas] the perfect ambassador for us: her personality, her integrity, the fact that she’s up and coming, she’s new, she’s interesting. And, of course, she’s clearly very beautiful, and the jewelry looks amazing on her.”

De Armas sports a variety of pieces during the commercial, including a diamond line necklace, eternity pendant, and choker.

“The purpose is to celebrate diamond jewelry in total, as opposed to old category campaigns, which were very much about one specific item of jewelry,” Kellie says. “This is a celebration of diamonds overall.”

He says the commercial—set to a remix of the Four Seasons chestnut Can’t Take My Eyes Off You—ranked in the top 10% of luxury ads as far as driving purchase intent.

There will also print and digital executions, meant to guide consumers to NDC’s site, Only Natural Diamonds. That page is now updated daily with diamond-related content. New features include “Inside My Jewelry Box,” where celebrities talk about pieces that mean a lot to them; “Diamond Diaries,” profiles of notable industry personalities; and monthly trend reports.

“We want to push out content 365 days a year,” Kellie says. “We want to engage the consumer deeper with more information and more knowledge over and above just seeing a 30-second commercial or a print ad.”