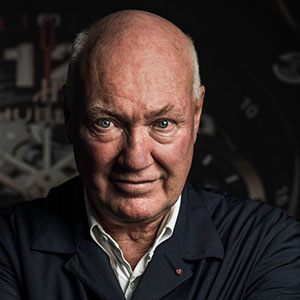 Jean-Claude Biver (pictured), the colorful watch executive who has headed brands ranging from Hublot to Blancpain, is stepping down from his current role as CEO of LVMH’s watch division.

“I will remain as nonexecutive president of the watch division and of the three brands Hublot, TAG Heuer, and Zenith,” he tells JCK, without commenting further.

That seems to confirm a Reuters report that Biver will no longer play an operational role in the watch division.

He told the news agency: “I’ll no longer be cutting the onions and crying in the kitchen early in the morning, I’ll just come later to see if they are ready.”

Reuters also reported that the 69-year-old executive had faced health issues, and Biver said that he was “doing better, but not fully recovered.”

The number of watch brands that Biver has headed is impressive and probably without peer. He began as a salesperson for Audemars Piguet in 1975. Six years later, he and Jacques Piguet purchased the then-defunct watch brand Blancpain. In 1992, Swatch Group (then called SMH) bought the brand for a reported $43 million. He remained its CEO until 2003, while also taking the reins of Swatch brand Omega.

After a year’s leave from Swatch working with Franck Muller, in 2004, he became head of Hublot—then one of the few independent watch brands—where he is credited with reviving the brand with his successful Big Bang line and helping develop a new form of scratch-resistant gold. It was purchased by LVMH four years later.

In 2014, Biver was appointed head of LVMH’s watch division, and in that role has served interim stints as the CEO of Zenith and TAG Heuer.

Lately, Biver has become a born-again believer in smartwatches, memorably hosting Google and Intel executives at Baselworld in 2015 to unveil the TAG Heuer Connected watch. The event climaxed with the three partners gathered around a piece of Biver-made cheese.

Biver is, in fact, a devoted and well-respected cheese maker, producing a product that “can send the authors of Michelin guidebooks into rapture,” according to The Economist. “Switzerland’s best chefs regularly call him begging for some.”

In July 2010, Biver gave JCK a taste of his personal habits and preferences—though, unfortunately, not his cheese—for our questionnaire feature, JCK Asks.