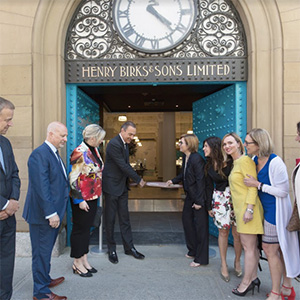 Canadian jewelry retailer Birks Group will begin accepting bitcoin at select stores—making it the first luxury retailer in Canada to do so, according to a company statement.

“Birks Group has a large number of international shoppers, so allowing them to pay in bitcoin makes perfect sense,” said Sonny Singh, chief commercial officer of BitPay, in a statement.

Jean-Christophe Bédos, president and CEO of Birks Group, said in the same statement that he considers this to be a significant move for the retailer.

“As an internationally growing brand…we look to align ourselves with these innovative capabilities that are on the forefront of technology,” he said.

Bitcoin was purportedly invented in 2009 by Satoshi Nakamoto (whose real identity remains a mystery). Units of the cryptocurrency are created through digital “mines” that involve hundreds of computers scattered across the globe.

Originally valued at less than a penny, the appraisal of the world’s largest digital currency soared to nearly $20,000 in December 2017. Its value has since crashed to around $4,000, down more than 70 percent from its peak.

According to statistics published in Bitcoin Market Journal, 22 million bitcoin wallets have been set up globally, and an estimated 5 percent of Americans hold at least some bitcoins.