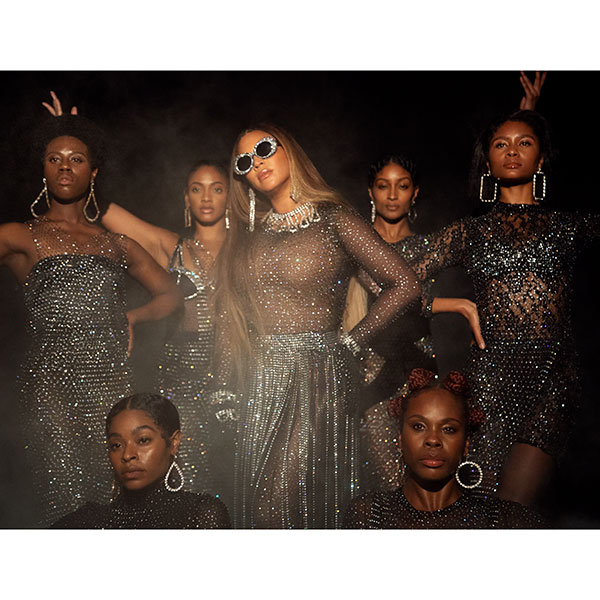 As globally iconic as she is, Beyoncé Knowles-Carter loves sharing the spotlight with other artists. The pop superstar’s Black Is King visual album, which dropped on Disney+ on Friday, is an Afrocentric celebration that includes celebrities Lupita Nyong’o, Naomi Campbell, Kelly Rowland, and husband Jay-Z, along with a massive cast of talented dancers, singers, and entertainers.

It’s also a high-profile showcase for bespoke and DIY fashion.

In Black Is King, Beyoncé wears dozens of original ensembles—and cast members wear hundreds more—most of which were created expressly for the project. The costuming was led by stylist Zerina Akers, who sourced accessories from a few luxury houses—including Chanel, which has a pair of earrings in the special. But mainly from independent jewelers and accessories makers, many of whom worked for months creating pieces for the project, which was originally filmed as a companion piece to Disney’s The Lion King: The Gift soundtrack.

Jewelry and bejeweled accessories are in nearly every frame of Black Is King. And the artisans who created them are now basking in the glow of the project’s attention and acclaim. Black Is King is, in Beyoncé’s words, a celebration of Black heritage. And in this cultural moment it feels so right, and so powerful.

Laurel DeWitt, a Los Angeles–based metal designer who creates jewelry, body pieces, handbags, and more, was a key accessories maker for Akers during Black Is King. She created a majestic-feeling pearl headdress, a turban glittering in crystal, and a crystal rope hip piece and choker set the superstar wore with intricate body painting by artist Francesca Tolot. DeWitt also made many of the crowns used in a live chess board scene. “I was pumping out pieces left and right and very hands-on with Zerina’s guidance,” she recalls.

DeWitt and Akers know each other from their days the New York City fashion world, and Akers gave the artisan her first placement, on Beyoncé, for the “Hymn for the Weekend” video with Coldplay in 2015. “Years later, we both reside and work in L.A.,” she says. “She entrusted me with the opportunity to make custom pieces for the music video ‘Spirit’ from The Lion King.” Nearly all of DeWitt’s pieces for Black Is King were commissioned, with the exception of a silver metal halo. “That piece was from my new collection and perfect for that look,” she says. “Bey loves a halo!”

DeWitt recalls that there was “an intense week or two of no sleep when they were shooting ‘Find Your Way Back’ and ‘Mood.’ With celebrities and evolving creative direction, there is often a tight deadline. I can zone out and work on something for days straight (with a lot of caffeine). When it was done, my hands literally stopped working. I had to take a couple weeks off.”

DeWitt says she cried when she watched the special for the first time this past weekend. “I’m an artist, and when another artist who has access to almost anything in the world chooses to wear my pieces it is a feeling that’s unmatched. It feels surreal. This film is historic and so important to our world and our youth, and I am honored to be a small part of it.”

Kerin Rose Gold, founder of A-Morir Studio, handmade many of the crystal hoop earrings and all the various crystal-encrusted sunglasses Beyoncé wore—including the Pebbles sunnies Gold hand-adorned with the black-plated crystal chain that Bey wears in all the Black Is King promo photos.

The maker notes, “I never thought I’d make a living as an artist, but here I am, 13 years in, with arguably the biggest moment in my career to date. This is a special moment for a lot of independent designers.”

Gold has been a resource for stylist Akers since before she started working with Beyoncé, “and she’s routinely requested pieces from me for various moments over the years, but this was definitely the most special request,” she says. “I knew they needed pieces for a very crystal-heavy performance, which turned out to be Find Your Way Back, and I had just finished a collection of pieces using this black-plated crystal chain from Preciosa that I am still very much in love with.”

Those pieces were perfect for the video. But Akers commissioned Gold to create the crystal cat’s-eye goggles Beyoncé wore during a kitschy synchronized swimming scene, which Gold says, “shows all the adhesives’ naysayers that if you know your adhesives, you can make quality pieces that can withstand being used underwater for a whole day of filming!”

NYC-based indie jewelry designer Ariana Boussard-Reifel has had a major moment with Beyoncé before—Bey wore her namesake brand’s bold Despina cuffs during her very pregnant, golden-goddess Grammy Awards performance in 2017. And in Black Is King, the designer spotted several of her collection pieces, including her Kalahari Earrings (in “Spirit”), her Monsoon earrings (in “Already”), and her Antilles Earrings and Noh Cuff, which accessorized Beyonce’s Burberry cow-print ensemble.

“It’s incredibly gratifying to see my work come to life as part of a project that is both so artistically rich and so culturally potent,” Boussard-Reifel says. “The visionary creativity of Zerina, creative director Kwaisi, and Beyoncé inspires me to push my work further and bring a more social and global impact into my process of making.”

She adds, “When Beyoncé wears my jewelry, it has far more impact for the brand than any other [placement]. I think it’s not just the level of celebrity that she brings, but the visual power of the moments she creates. She shows that jewelry is not just decorative, but it is an emblem of power and expression.”

New York City–based indie jewelry collection L’Enchanteur, founded by identical twins Dynasty and Soull Ogun, also contributed several metal pieces to Black Is King—including the GodHead earrings (a connected line of faces) and a metal mouthpiece she wore in the video for “Already.” Soull says many of the styles they contributed were “pieces that were in our collection that we went hyper on.”

Akers gave the designers a deadline to create pieces for the project as well as a mood board–like collection of images. But otherwise, “she completely trusted us to come up with what we wanted. There was a major level of trust there. It was a privilege to have that.”

Soull notes that she and Dynasty felt intimately connected to the project—their father is Nigerian and their mother is from the West Indies. “We had a lot of that style growing up,” she says. “There was a level of familiarity there.”

Akers worked with most of the jewelry and accessories artisans in 2019—back before the pandemic and before George Floyd’s murder put the Black Lives Matter movement at the center of American life.

As she watched the special, Soull recalls feeling that “it’s a beautiful moment for the film to drop, because it’s a great celebration of Africa. And we hadn’t seen anything from it and it had been so long. You never know if you’ll see any of your pieces in it. Maybe you will, maybe you won’t. But what we felt after was deep honor and gratitude.”