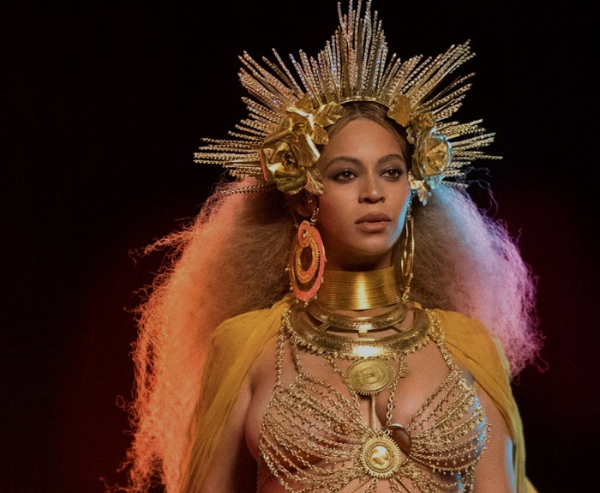 The pop queen ruled the night in a goddess-worthy getup

In a night full of memorable, soul-shaking performances—including a powerful, political turn by the hip-hop group Tribe Called Quest and a moving ode to the late George Michael by Adele—Beyoncé and her baby bump, resplendent in a golden lace gown, stole the show.

In the process, Queen Bey (who’s pregnant with twins) also provided the wow jewelry moment of the evening—and, quite possibly, the decade.

Her custom Peter Dundas–designed dress was accessorized with a golden headpiece and Egyptian goddess–inspired jewelry worthy of a Gustav Klimt painting. (The ensemble also served as an announcement for the designer’s new, eponymous collection.)

The headpiece and jewels were made by House of Malakai, an innovative and edgy custom firm that specializes in intricate, 3-D–produced jewelry and accessories. The firm has created several pieces for the pop star in the past, including this chained face piece.

There were at least two other jewelry brands represented in the ensemble. Designer Ariana Boussard-Reifel reached out to let us know she designed Beyonce’s chunky, open gold bracelet: the Despina cuff from her first collection.

And Corey Lolley, designer for Maya Jewelry, emailed to let me know that she did made the intricate inner discs for Bey’s earrings. “The pieces that they used are one of my best-selling designs that I launched many years ago,” she said.

Dundas, who’s been dressing Beyoncé for more than a decade (he designed the key look for the singer’s most recent album, Lemonade—that marigold off-the-shoulder dress), told Vogue that the dress required one week to embroider with 50 people working on it constantly, and took inspiration from Gustav Klimt, “Art Deco motifs inspired by Erté,” and lyrics from the Lemonade track Love Drought.

“I like creating stories within a garment,” the designer said. “It was a fun way to celebrate the moment for her.”

(Photos at top courtesy of Beyonce.com)