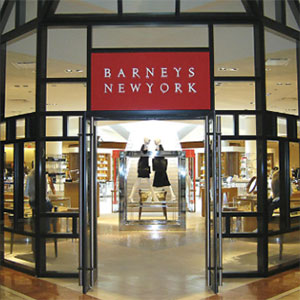 Barneys New York’s Madison Avenue flagship has struck a deal to remain open for at least another year—as liquidation sales begin at four other locations.

“We have come to terms with Authentic Brands Group, Barneys new owner, to keep the Madison Avenue store open in a smaller footprint for the next 12 months while we continue to explore longer term solutions,” said a statement from landlord Ashkenazy Acquisition Corp. “[Restaurant] Fred’s will remain open as well.”

Ashkenazy added it was “disappointed” that the brand ended up sold to Authentic Brands Group (ABG) at a court hearing last week.

“We worked tirelessly with potential buyers and operators to preserve Barneys operations at our properties,” it said. “The New York and Los Angeles stores produce approximately $20 million and $30 million, respectively, in profitability for Barneys per year—even after the recent rent resets at both locations.”

Meanwhile, liquidation sales will begin at four Barneys locations, including its downtown location in the Chelsea district of New York City, plus its stores in Los Angeles, San Francisco, and Boston.

A statement from its two liquidators said that “exclusive private sale events are being planned for Barneys’ most loyal customers, starting next week.”

In a statement, ABG said it will “reboot” Barneys as a brand boutique on the ground floor of Saks Fifth Avenue’s newly renovated New York City flagship. It’s also considering possible pop-ups at other Saks locations, it said.

It also plans “shop-in-shops, e-commerce, and a new freestanding store in a key U.S. market,” which has been revealed as Greenwich, Conn.

“Some [of the new locations] are going to be as big as 50,000 square feet and maybe some as small as 5 to 10,000 square feet,” ABG’s chairman and chief executive officer Jamie Salter told The Cut. “We’re fairly confident that over the next couple years Barneys will be much bigger than it [is] in its current state.”

Salter called Barneys “a retail brand that in my opinion is a real brand, that has a heartbeat, has a lot of emotion, can go in a lot of directions. It’s part entertainment, it’s part luxury, it’s part trend, it’s part experiential. It really is an incredible brand to add to the ABG portfolio. We are going to treat it incredibly carefully.”