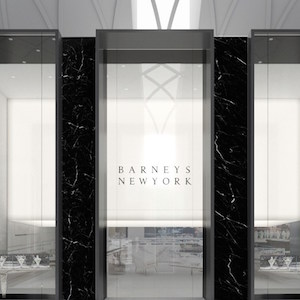 The 96-year-old store is now looking for a buyer, it said in a statement.

As part of the process, it plans to trim 15 stores from its current 22-store fleet. Slated for closure are its stores in Chicago, Las Vegas, and Seattle; five smaller concept stores; and seven Barneys Warehouse locations.

That will leave it with five physical stores—two in New York City; one in Beverly Hills, Calif.; one in San Francisco; and one in Boston—as well as two Barneys Warehouse locations, in Central Valley, N.Y., and Livermore, Calif.

It has secured $75 million in financing from affiliates of Hilco Global and the Gordon Brothers Group. According to its bankruptcy papers, its 2018 revenues totaled $800 million, and it has $200 million in funded debt obligations.

A declaration by chief restructuring officer Mohsin Y. Meghji said the retailer has been operating under “severe liquidity constraints.”

He said that Barneys has been hit by the general challenges facing brick-and-mortar retailers, and its sales “significantly underperformed expectations” in the first half of the year, particularly in its locations outside major metropolitan areas. To fight this, Barneys had increased its in-store promotions, marking down items as much as 76%, which increased sales but didn’t stop the negative cash flow.

According to CNBC, landlord Ashkenazy Acquisition Corp. had jacked up its rent from $16 million to approximately $30 million, wiping out its annual profits.

The financial issues meant that vendors refused to ship goods except for cash on delivery, Meghji wrote.

“The lack of fresh and sufficient inventory further tightens the Debtors’ liquidity,” he said. “Without the flow of fresh inventory, the Debtors’ retail business will effectively starve.”

Last week, JCK senior editor Emili Vesilind reported that vendors were starting to ask for their merchandise back, and that its employees’ union had complained Barneys was delinquent with health insurance and pension payments.

Meghji said that Barneys has been looking for a buyer for some time but “ran out of time.

“Many of these investors nonetheless remain interested in Barneys,” he said. “[We] intend to continue exploring potential transactions with such parties on a post-petition basis.”

WWD has reported that one possible suitor for Barneys is Authentic Brands Group, the intellectual property company that owns an assortment of other brands, including Neil Lane. That could mean a “change in business model for the retailer,” it said.

The New York Post reported a lot of other potential buyers, including retailers such as Macy’s and Hudson’s Bay Co.—some beset with troubles of their own—”kicked the tires and passed” until the situation with Barneys’ rent gets resolved.

Barneys was founded in 1923 as a men’s store by Barney Pressman, using money he raised by pawning his wife’s engagement ring.

By the 1970s, the retailer, which was now selling to both men and women, became well-known for being an international tastemaker. In the 1990s, it planned a nationwide expansion, in partnership with Japanese retailer Isetan. But the two parties had a falling out, and Barneys filed for Chapter 11 for the first time in 1996. It emerged two years later.

In 2004, Jones Apparel Group bought the retailer for $400 million. It sold its stake to Istithmar World two years later.

In 2012, Barneys underwent an out-of-court restructuring that had Perry Capital, a hedge fund that is now closed, emerge as a majority owner with a 72% stake in the company. Yucaipa Companies and Istithmar hold 20 and 8% stakes, respectively.

Barneys has long been known for its support of jewelry designers—both new and established. In 1998, Linda Lee Johnson introduced the store’s first jewelry collection, forging a partnership that lasted three decades. In recent years it has featured collections from Fernando Jorge and Irene Neuwirth.

In 2015, it announced it was partnering with certain jewelers to sell their products via Instagram. In 2016, it became one of the first established retailers to feature a lab-grown diamond collection—a collaboration with Diamond Foundry that raised a bit of controversy.

“I would like to express my deep appreciation and profound gratitude for the continued support of our employees, vendor community and customers—truly the lifeblood of Barneys New York,” she said. “Our decades-long partnerships and relationships will continue for many years to come. We are unwavering in our commitment to executing our forward-thinking vision of what retail should look like today.”

Barneys employs around 2,300 people, including 200 part-timers.