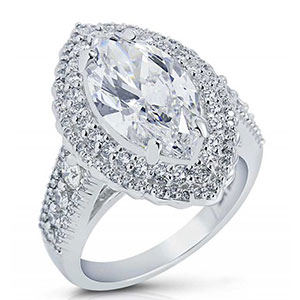 The survey polls 14,000 engaged or recently married brides and grooms across the United States. Some highlights already appeared in last month’s JCK.

Only one in three couples—33 percent—shopped for the engagement ring together. The average purchaser took three and a half months to finally pull the trigger on the ring.

But 72 percent of grooms said they faced challenges in buying a ring, including not knowing if they were getting a good deal (35 percent) and not knowing diamond terminology (28 percent).

The survey also found that online sales are growing, with 14 percent of engagement rings bought online, up from 10 percent in 2011.  Some 45 percent were purchased at local or independent jewelers.

In addition, online is now the most popular way couples have met, with online dating mentioned by 17 percent and social media by 2 percent, for a total of 19 percent. That beats traditional methods like meeting through friends (17 percent), college (15 percent), and work (12 percent).

Most popular shape: Round (52 percent)

For more jewelry information from The Knot survey, click here.