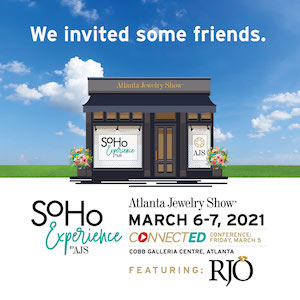 A lot of jewelry shows have already been called off this year, including AGTA’s GemFair and the Independent Jewelers Organization’s February conference—but some groups are saying their shows will go on.

The Atlanta Jewelry Show is still scheduled to be held March 6–7, 2021, at the Cobb Galleria Centre. This two-day event will be preceded by a full day of education, the ConnectED Pre-Show Conference, on March 5.

The show, titled the SoHo Experience by AJS (“SoHo” stands for “Southern Hospitality”), will include a space for the buying group Retail Jewelers Organization (RJO). This marks the first time the two groups have collaborated in this way.

“Now more than ever it is time to work together, think outside of the box, and find collaborations that serve the industry as a whole,” said RJO CEO Sarah Streb in a statement.

Safety procedures will include controlling the check-in process to restrict attendee flow; daily health screening and temperature scanning prior to entry; an enforced, mandatory mask rule; rearranged floor plans and seats to ensure necessary physical distancing; and complimentary personal protective equipment for all attendees and exhibitors.

The Manufacturing Jewelers and Suppliers of America also hopes to hold its MJSA Expo this year, after canceling it last year. The expo, which was originally meant to be held in March, is scheduled for Aug. 8–10 at the Javits Center in New York City. It will run at the same time as the summer JA New York retail show.

“The Javits Center has invested in numerous additional safety and sanitizing protocols as part of its ongoing multimillion[-dollar] expansion,” said David W. Cochran, president and CEO of the Manufacturing Jewelers and Supplier of America, in a statement.

The expo’s educational program will follow a “hybrid” model, with many of its sessions livestreamed.

More information on the Atlanta show can be found here, and on the MJSA show, here.