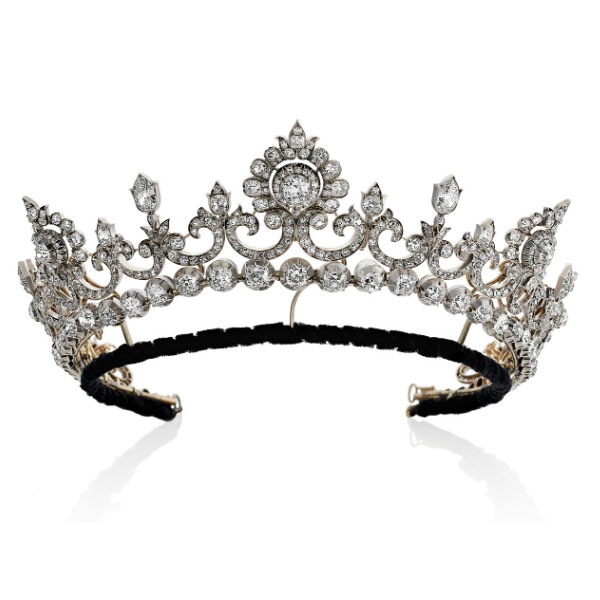 …and this jewelry writer is all ears. As usual.

I don’t need much of an excuse to cover these over-the-top examples of regal and/or black-tie adornment, from Mikimoto to Wendy Brandes. And let’s not forget all those headpieces that turned up in last year’s Maharajas & Mughal Magnificence sale at Christie’s.

Next up: A rare appearance—and chance to acquire—the outstanding Anglesey diamond tiara at Tefaf Maastricht 2020, the prestigious art, design, and antiques fair held annually in the Netherlands. The tiara is being exhibited at the fair by Hancocks London (stand 243), the award-winning,  high-end jeweler based in Mayfair.

Previously owned by one of the British aristocracy’s most flamboyant and controversial characters, the 5th Marquess of Anglesey, Henry Cyril Paget (aka the “Dancing Marquess”), the circa-1890 tiara is formed of a graduated row of more than 100 carats of old European– and old mine–cut diamonds, which can detach to form a stunning rivière necklace.

The design is further adorned in scroll and cluster motifs and interspersed with curved tines topped with graduated pear-shape diamond-set motifs surmounted to a velvet-covered band.

Upon Paget’s death in 1905, the title and family estate passed to his cousin Charles Henry Alexander Paget, who became 6th Marquess of Anglesey. Charles left the wearing of jewelry to his wife, Marjorie, who took ownership of the jewels that had not been sold off to repay Paget’s creditors. Lady Marjorie posed for renowned society photographer Cecil Beaton at the coronation of King George VI wearing the tiara.

Between the provenance and the rocks, the tiara is clearly something special.

As Guy Burton of Hancocks London said in a statement: “This is a unique piece in every way. The 5th Marquess was a fabulously extravagant character even by the standards of his day. He really was the black sheep of his very distinguished family. It’s a truly magnificent piece and, needless to say, jewelry of this provenance and story rarely appears on the open market, so we are particularly excited to unveil it at one of the world’s most prestigious art fairs.”

Top: “If jewels could talk, this tiara would have a fascinating story to tell,” according to Guy Burton of Hancocks London. Your first opportunity to the see the Anglesey tiara at Tefaf Maastricht, held at the Maastricht Exhibition & Conference Centre, is Thursday (an invitation-only early-access day), followed by a special preview day on Friday. The fair is officially open March 7–15.