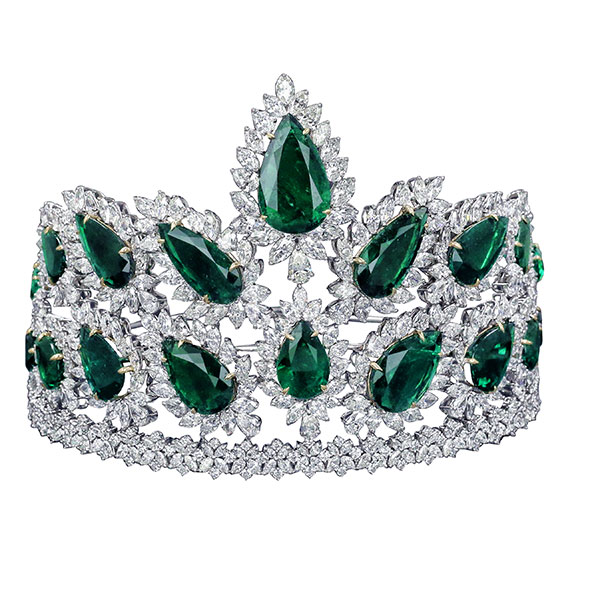 I mean, any excuse to show a gem-encrusted tiara, right? Right?

The one shown here is designed by Jacob Arabo of Jacob & Co., a marquee name in our industry due to his intrepid custom work for hip-hop stars and moguls. His bling-bling style, and willingness to take on celebrity requests, defined him in the 1990s and well into the 2000s.

Certainly his aesthetic and range have evolved in the intervening years, and the tiara, created for this weekend’s Miss World America pageant, is a great example of the projects that have been occupying him of late.

And what, pray tell, is Miss World America? According to its website, the pageant is “the USA national preliminary into Miss World International contest. The United States has continuously sent a representative to Miss World since its inception in 1951.”

The winner of the contest will don the masterpiece creation, which is made entirely of white gold and set with white diamonds and Colombian emeralds. According to Jacob & Co., it has a value in excess of $12 million and is believed to be the most valuable pageant crown in history.

Here’s a video with some 360-degree perspectives on the piece:

If you were in New York this summer, you may have spotted the emerald tiara on display in the Jacob & Co. flagship boutique on 57th Street. Soon it will be headed to the Orleans Hotel and Casino in Las Vegas for the Miss World America festivities.

It does not appear that this event is being televised, but I’m pretty sure you’ll be able to see something on Instagram—stay tuned.