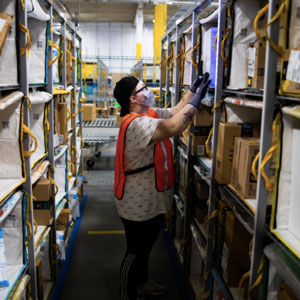 Amazon, the retailer most of us rely on to deliver our vitamins, toothpaste, dog food, etc., has been criticized for years for actions (and inactions) that many attribute to a growing record of poor corporate citizenship.

Persistent charges leveled against the Seattle-based retailer have included underpayment of employees, and the company’s virulent avoidance of taxation. (In September, Amazon passed the costs of the new Digital Services Tax in the U.K. on to its independent sellers, to name one instance of this.)

There have been employee walkouts and community sit-ins to protest Amazon’s practices. But anti-Amazon sentiment, during a time that’s both tense and financially tough for many Americans, has reached a new high.

During the COVID-19 lockdowns, Amazon doubled its profits, and Bezos’ personal wealth shot up to $70 billion. Amazon is poised to double its warehouse footprint in 2020 and expand its workforce by roughly 300,000 people. Simultaneously, 19,000 Amazon employees contracted COVID-19, according to the company, and Amazon employees across the country protested what they considered unsafe working conditions.

Amazon did give its employees temporary pay hikes at the start of the pandemic but promptly rolled them back this summer—though the pandemic continues to rage on, with infection rates on the rise in many states.

The protestors were also calling for a boycott of Amazon’s Prime Day event, which starts Tuesday. Also on Tuesday: Another boycott, this time in front of Bezos’ New York City residence, is planned for 10:30 a.m.

The anti-Amazon movement is growing on social media; the hashtag #boycottamazon has been used more than 5,000 times in the past few weeks on Instagram, and posts that instruct consumers on how to online shop while bypassing the retailer have become ubiquitous.

Still, the backlash constitutes a very small movement when measured against the retailer’s global might.

More than 197 million people around the world use Amazon monthly. And the company has successfully pushed into most consumer categories, gobbling up small businesses along the way.

The company recently made its way into luxury fashion—one of the last consumer categories left for it to conquer—with its new Luxury Stores. The site’s Oscar de la Renta boutique debuted in mid-September.