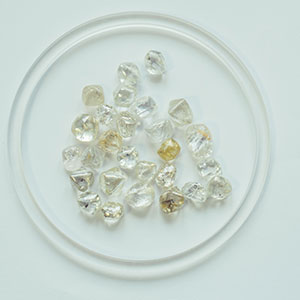 When writing last week’s post on Alrosa’s new Russia-based diamond brand—my piece was inspired by this New York Times story—I reached out to Alrosa’s spokesperson Jane Kozenko with some questions. This week, she sent me some answers, which are interesting enough that they merit their own post.

JCK: For your new brand, are you introducing any kind of new tracking system?

Alrosa: Yes and no. The idea of tracing is not new. Many companies are thinking about of it now, and many of them are implementing something.  We understand that being the world leader in diamond mining, we should provide the consumer with full guarantees of the authenticity of our diamonds and tell them the story of its origin. Given the demand for this kind of information, we would like to give not just very detailed data, but make it interesting and easily understandable. Therefore, we are now looking at different systems that are being developed in the market and looking for the most acceptable solution.

Do you plan to give the brand a particular name?

Yes, and we would like it to become a trusted name. That is why we consider the basic tracing system important—its reliability, scalability, customer focus. We see demand from the market and understand that the Alrosa name speaks a little to a majority of consumers. So the title of the tracing platform and its marketing support is one of the keys.

Who is your target audience?

All the people interested in traceable diamonds. First, millennials who show adherence to ethical consumption. They are not the same as their parents, they are choosing responsibly and want to know more about the product. In addition, well-off people—those who buy not small, but at least medium-sized diamonds. I think two factors play a role here: not only the ethical side of the issue, but also the need for confidence that they are investing their money correctly.

Do you have any thoughts about the issue the Times mentioned—about how the perception of Russia has now turned negative among some in the United States?

These concerns were anticipated, but we do not see it as a threat.

The project is not focused on the U.S. market only. Of course, we are interested in the U.S., as it’s the largest diamond consumption region. But we will present it to all the markets. Actually, there will be an online platform at the core, available from every country. And even if we talk about “negative perception” in the U.S., we believe that not all people think stereotypically and make decisions based on news about politics on TV. Ethical standards of diamond mining are more important to consumers, and in this sense, Alrosa is an impeccable company, which is a core supporter of Russian north regions’ development.

It is 100 percent labor protected, because no one ever heard about child labor in Russia, and our workers have salaries three times higher the average salary in Russia, and a very strong trade union, keeping their rights under control. Alrosa taxes and dividends form about half of the budget of Yakutia, our key region of operations. We annually spend more than $150 million for social projects and more than $100 million for environmental protection.

The core idea is not Russia itself, but traceability, full transparency. It is a way to guarantee the naturalness of the diamond, to get information about its origin. We talk about Russia because Russia is a home for our diamonds. And we see it as a competitive advantage. Yakutian and Arkhangelsk diamonds are 100 percent conflict-free, as there never were any civil wars or conflicts. It is 100 percent legal, because if we talk about diamonds—our rough stones have never left the country before becoming polished; there are no third parties.

Any comment on the recent articles which reported that Brexit-backer Aaron Banks was offered a stake in Alrosa? (While Banks declined, the fund associated with his business partner, James Mellon, a fellow Brexit backer, did take a stake. Mellon says he was not involved in that purchase.)

We are a public company with [more than] 30 percent of shares in free float, which means every investor is allowed to buy or sell our shares, and [the] decision to buy our shares by both individual investors and institutional investors is defined by their best understanding of the market and depends on their investment strategies. We as a public company cannot control decisions of our shareholders. We strive to ensure equal treatment of all our shareholders, both local and international ones. Alrosa public offerings attracted hundreds of institutional investors from all over the world in both 2013 and 2016, as the company was an attractive investment.

A follow-up to the above: There have been reports that the government sold the shares in a private placement to Mellon’s fund at a discount to a “restricted group of investors.” How was the decision made to include that fund in the private placement, and what do you think of press speculation that there were political considerations involved?

There was not any “private” offering to a limited group of investors. In 2013, there was the Initial Public Offering (IPO), meaning it was happening for the first time. In 2016, there was the Secondary Public Offering (SPO, which is often named IPO by mistake), meaning it was happening for the second time. Regardless of Initial or Second, it was still a public offering, accessible for all investors without any limitations and having a fixed price per share for all of them.

This is also the answer to the “what do you think” question. We think that unfortunately people often don’t check facts before drawing a conclusion.