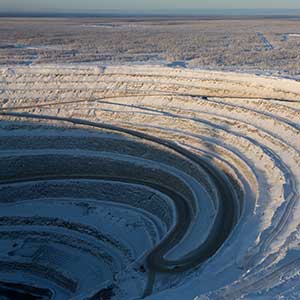 This week, The New York Times reported that Russian diamond miner Alrosa is hoping to brand its stones as being of Russian origin.

“Mine to market is becoming very popular,” CEO Sergei Ivanov Jr. told the newspaper. “Our customers are educated, all around the world. Often, when they come to a jewelry store, they ask, ‘Where is this diamond from?’”

This goes along with remarks Alrosa director of sales Evgeny Agureev made during an interview at JCK Las Vegas.

Getting into origin branding would ordinarily seem a smart move. Canada has been doing it for nearly 20 years. Alrosa has even considered it before.

But the problem is, as with so much in this era, politics.

Two years ago, no one would have blinked an eye at a Russia-branded stone. But now with all the stories about President Vladimir Putin’s involvement in troll farms and overseas elections, the U.S. perception of Russia has changed. A February Gallup poll found that 72 percent of Americans view the country negatively, and only 25 percent see it positively. Yesterday, Sen. John McCain tweeted that “Putin is our enemy.”

“The current climate is working against [Alrosa],” Russian retail analyst David Ferguson told the Times. “Brand Russia, at this particular point in time, is not particularly strong overseas.”

Alrosa is hardly divorced from Russian politics. The Russian Federation owns 33 percent of the company; the government of Sakha, where most of Alrosa’s mines are located, owns 25 percent. Its CEO, Ivanov Jr., appointed last year, is the son of a close Putin confidante.

Last week, Alrosa found itself a peripheral player in the swirling whirlpool of accusations of Russian interface in overseas elections.

The New York Times reported that, in the run-up to the Brexit referendum, a Russian businessman offered prominent “Leave” backer Arron Banks a chance to participate in the Russian government’s July 2016 sale of 10 percent of its Alrosa holding. Banks, who claims other diamond interests, declined, although the investment fund owned by business partner James Mellon reportedly snapped up a million-dollar stake. Mellon later told The Guardian that he had no role in the fund’s investment decisions and did not benefit from the Alrosa shareholding.

While the significance of all this is not clear, at this point just about everything in Russia is being scrutinized. This blog has long favored origin tracking. Alrosa certainly has the right idea. But it could be coming at a very bad time.

At press time, Alrosa did not reply to questions from JCK, but we hope to hear more from the company in the near future.