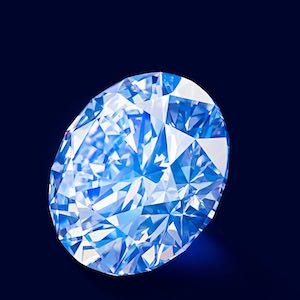 There’s long been a talk of an industry prejudice against fluorescence—and while it’s not the kind of bigotry that gets people marching in the streets, diamonds with strong fluorescence are heavily discounted in the market.

And the thing is, no one seems to know why. Like most types of prejudice, it is fundamentally irrational.

It’s true that diamonds with strong blue fluorescence sometimes have a milky or cloudy appearance. But not all of them do. In fact, that feature is considered uncommon.

Others say they’re fans of fluorescent diamonds, arguing that the material is often “crispier,” and fluorescence can increase the stone’s color grade.

“I don’t know if there is a topic more frequently discussed or debated among diamond experts than fluorescence,” said Quick.

And yet despite periodic efforts to settle this question—some going back decades—the trade still has an aversion to strong blues.

But now Russian diamond miner Alrosa—which produces its share of fluorescent stones—is trying to get the trade to embrace fluorescent diamonds the best way it knows how: by having consumers want them.  It plans to introduce a fluorescent brand this fall.

“We thought, as the largest diamond miner in the world, it behooves us to take a leadership position on this topic,” says Rebecca Foerster, president of Alrosa USA. “Fluorescence is a very rare, unique feature of natural diamonds. Not that long ago, it was a coveted feature.

“But it was like we, as an industry, decided that all of a sudden it wasn’t positive. It’s gotten to the point where they are so discounted that you can’t even sell them. But when you talk to consumers, they have no real negative opinion of it. There’s no consumer barrier to the product.”

In fact, in an Alrosa survey of 2,000 consumers, only 11% of them could correctly explain diamond fluorescence.

While Alrosa is not the first to fashion an offering around fluorescent diamonds, this new brand will be built around one of their most distinctive features—they sometimes turn blue under ultraviolet light. If wearers don’t know about this feature, they might freak out if they see it happen at a nightclub. But if they know about it, they might grow to like or even love it.

“We want to make the blue glow a symbol that consumers can connect to,” she says. “It represents this hidden secret, this inner light.”

After Alrosa explained the concept to consumers, 82% said they would consider purchasing a fluorescent diamond, and 73% were ready to spend 10%–15% more for one, because they perceived the diamonds as “unique” and “rare.”

The brand will be aimed at high-end independents. Its role model is the campaign for brown diamonds—also once disdained by the trade. When rebranded as “champagne” and “chocolate,” they found a market.

“My customers are very excited about this,” says Foerster. “People want something new to sell. They to talk about diamonds in a new way. They want to be able to tell a new story.”