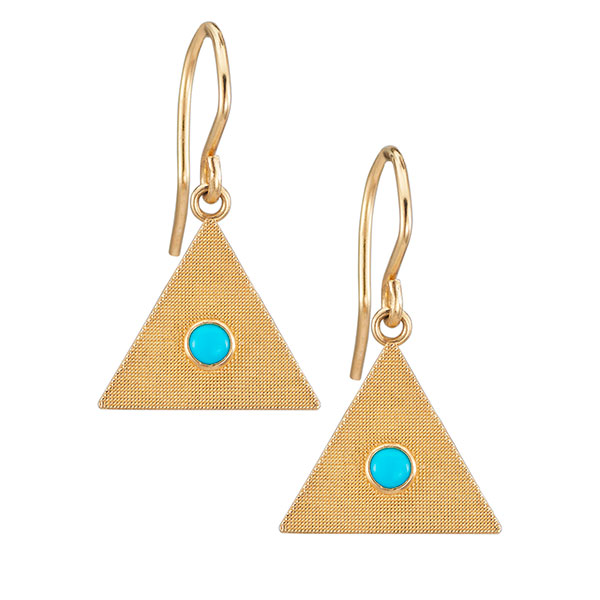 This holiday season, the best thing you can do is “deco” the halls. For real. By now, the consumer recognizes the art deco style as cool and is likely to be informed enough to refer to it (or search for it) by name.

But flashes of deco flair aren’t the only thing to make the Alice Pierre line worth considering for inclusion in your holiday lineup. The prices are outstanding. This is because designer Alice Basteguian is able to keep costs down by having the line produced in her family’s downtown Los Angeles jewelry manufacture in collaboration with her brother and cofounder, Pierre.

“I’m definitely influenced by art deco and the forms, structure, and geometric shapes found in architecture in general,” says Basteguian. “I think there’s something so remarkable about adding layers and texture to a form to make it come to life.”

The 14k gold collection is chic and wearable, but it’s distinguished by very detailed and intricate engraving—look closely at the earrings up top, and you can see its wonderful “sand” texture. But the vibe isn’t rustic. Instead, this glimmer feels glamorous.

The Puzzle collection, shown below, reminded me of pleated fabric but was, in fact, inspired by ethnic rug patterns. “Rugs are another means of inspiration for me to help tie everything together because there’s so much symbolism and culture—in addition to shapes and forms,” she says.

The Stella collection, with its fanned-out sunray patterns, was inspired by a vintage ring made by Basteguian’s grandfather, founder of the family’s factory. “I have several vintage pieces made by my grandfather that I draw inspiration from, and I named the collection after my daughter because it just fit—dainty but with oh so many layers,” she says.

The newest collection is a series featuring strong geometric silhouettes and onyx inlay. Basteguian says she loves that onyx is considered a protective stone; the pieces in this range also refer back to her grandfather, who frequently used onyx in his work.

The onyx designs start at $980, but the Alice Pierre look book is full of giftable earrings, bracelets, and rings that retail for less than $500.

More pieces from the line that caught my eye, below.