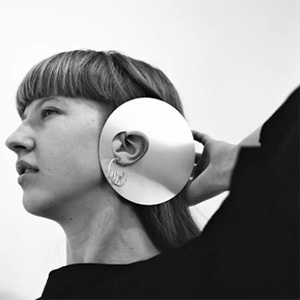 The Jewelry Center at the 92Y in New York City announced yesterday that Estonian jewelry designer Claudia Lepik will be its third annual artist in residence.

Lepik beat out a record number of applicants this year, which poured in from 33 countries. The selection jury was composed of Kathy Chazen, 92Y Board and Jewelry Center committee member; Freyja Hartzell, associate professor at the Bard Graduate Center; Jonquil O’Reilly, vice president and head of sale in the Old Masters department at Christie’s; JB Jones and Bella Neyman, cofounders of NYC Jewelry Week; and Jonathan Wahl, the director of the 92Y Jewelry Center.

Lepick tells JCK that when Wahl called and told her she was chosen, “I was speechless at first.” She adds, “when I realized what happened, I was overwhelmed with joy. I am really thankful to the jury that they chose me.”

One of her missions during her residency, she says, “is to experiment more with nose and face jewelry, which I’m curious about—and also finding other ways to attach jewelry to the face in ways other than classical.”

Lepik’s residency at 92Y will span Aug. 14–Sept. 15 and will culminate with a weekend workshop led by the jewelry designer Sept. 14–15.

The jury also recognized two runners-up for the residency: Ebrahim Mohammadian Elird from Bosnia and Herzegovina “for his lyrical and mystical jewelry and outstanding technical prowess”; and Fabiana Gadano from Argentina “for her beautiful use of recycled plastic bottles, which resemble flower petals or sea creatures under her hand’s manipulation,” according to a statement from the Jewelry Center.

The annual residency is designed to provide “time, space, and facilities for research, experimentation, and the cultivation of new ideas in jewelry and light metalwork—all while giving the artist an immersive experience in the vibrant world of New York City and 92Y’s arts and culture,” according to a prepared statement from 92Y. “We were thrilled to receive applications from around the world, and we’re looking forward to welcoming Claudia this summer.”