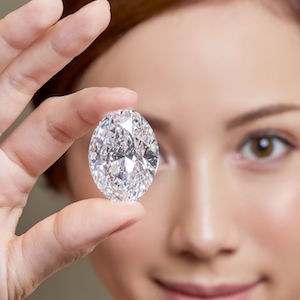 Yesterday Sotheby’s Hong Kong sold an 88.22 ct. D flawless oval (pictured) for $13.8 million to a Japanese collector who named it Manami Star after his eldest daughter.

The Japanese buyer, whose name was not given, first saw the stone while it was on exhibit in Japan. He and two other bidders vied for the item before the hammer finally came down. The final price topped its original $11.2 million–$12.7 million estimate and breaks down to $156,150 a carat.

The sale of the egg-size stone was much anticipated. The auction house boasted that the diamond was “perfected by every critical criterion”—both externally and internally flawless and with excellent polish and symmetry. It is also type IIa—rare for a natural diamond.

In addition to it being a rare appearance of a D flawless at auction, the Manami Star was one of only three oval diamonds over 50 carats to appear at auction in recent memory.

According to Sotheby’s, the number eight is considered a lucky number in China and other Asian cultures. The Chinese pronunciation of eight (bā) is similar to that of 發 (fā), meaning wealth or fortune. The number 88 is believed to bring good wishes in abundance.

The 88 carat diamond came from a 242 carat piece of rough that was discovered at the Jwaneng mine in Botswana. The mine is owned by Debswana, a joint venture between De Beers and that country’s government.

“We were thrilled to handle a diamond of such rarity, which now takes its place in the roster of top white diamonds to have come to the market here at Sotheby’s Asia,” said Patti Wong, chairman of Sotheby’s Asia, in a statement. “At 88.22 carats, this lucky stone now carries the name of the fortunate child whose father has chosen to give it her name. A happy moment in the journey of one of the earth’s greatest, oldest treasures.”