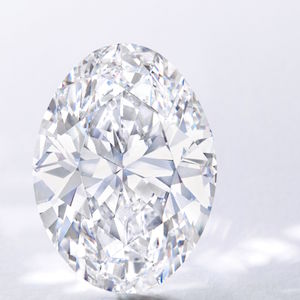 The diamond, which has been classified as an ultrarare type IIa, is expected to fetch between $11.2 million and $12.7 million at the sale, the auction house said.

According to its statement, in the last few decades just three oval diamonds over 50 cts. have appeared at auction. The last notable one—an egg-size 118 ct. oval, which was also D flawless—hit the block in 2013 and eventually sold for $30.6 million, a record price-per-carat for a white gem.

The 88 ct. diamond being offered in April comes from a 242 ct. piece of rough that was discovered at the Jwaneng mine in Botswana. The mine is owned by Debswana, a joint venture between De Beers and that country’s government.

Cutting and polishing the stone took “a period of intense months,” said the Sotheby’s statement, noting that the oval shape was chosen to preserve the greatest amount of weight. It also noted that the number 8 is considered lucky in China and other Asian cultures.

In a statement, Patti Wong, chairman of Sotheby’s Asia, called the stone a rare “treasure.”

“When you think that one ton of mined earth yields less than a carat of diamond, and that high quality diamonds over 10 carats are a rarity, the discovery of a 242 ct. rough, of gem quality and exceptional size, is nothing short of a miracle,” she said. “The perfect 88.22-carat diamond is a summary of everything: a wonder of nature, a masterpiece resulting from man’s ability to shape the hardest material on earth into an object of ultimate beauty and the most concentrated form of wealth, as stated by Pliny the Elder almost 2,000 years ago.”

Sotheby’s has said its 2018 jewelry sales at auction totaled $414 million.